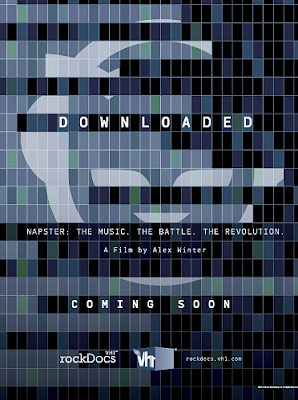 In May of 1999, an introverted college dropout and his chat room comrades developed version 2.0 of a software called Napster. Designed seemingly to mirror its chief creator’s habit of listening to the radio whilst programming his computer, its architects also idealized the app as a way of connecting with peers through music. The file format known as the .mp3 had already existed, but Fanning’s decentralized, multi-server invention put the rhythm in the algorithm, and the exposed hard drives of millions of users lead to easy access to virtually every song one could ever dream of hearing. College students across the nation freely turned their PCs into jukeboxes, and a new model for consuming licensed recordings was clear to see. All it ended up costing was $500 million in investment loans and one of the most heated litigations ever in regards to copyright infringement.

An actor whose previous career highlight was being the first at stake in 1987's The Lost Boys, provided you discount his later encounters with magical payphones and big-bootied Martians, Alex Winter's inaugural attempt at a feature documentary arrives courtesy of VH1's "Rock Docs" boutique label. Downloaded: The Movie was developed by Winter initially as a dramatized narrative film in 2002, but now comes to fruition after a decade as something which can be easily slotted between reality show reruns and repeats of "40 Awesomely Epic Fails." It also arrives in the wake of Napster co-pres Sean Parker’s unflattering supporting role in David Fincher's The Social Network as memorialized by Justin Timberlake’s predatory, power-crazed Faust of a Facebook founder.

The real Sean Parker testifies about his involvement in the digitalized downfall of the recording industry, opulently seated next to exotic plates of naked women, but it’s the company’s principal brain trust who emerges as the main and most fascinating personality on display. That would be Shawn Fanning, born in Brockton, MA but raised quite rocky to the point where he developed a highly-advanced technological expertise in his late teens. Winter frames the movie as Fanning’s eulogy, first by having Fanning recount his turbulent upbringing and then later freezing upon his solemn face as his former employees bust his chops about the collapse of his controversial passion project.

Winter is keenly aware of the youthful revolution that drastically altered the dependence on era-specific physical mediums like vinyl LPs and electronically-manufactured CDs. But even with chronology and context on Winter's side, a peculiar sense of romanticizing becomes the dominant attitude in the perspective of the key participants. Whether it’s Napster employees pondering the error of the recording industry’s ways in stifling any attempt at a legit paid-subscription service or a brief scene of Noel Gallagher championing the record shop experience, there’s more pining than pontification being expressed throughout. Even Lars Ulrich, the Metallica drummer whose vehement opposition to the unauthorized, unpaid distribution of his band’s songs (even when they weren’t complete) lowered him to level of a baby-kicking villain, confides his faith in the “American dream” of democratic, civil conversation whilst protesting the hundreds of thousands of anonymous users in supposedly unlawful possession of Metallica songs.

Whether seen as slack-jawed juveniles or graven thirty-somethings, Fanning and Parker tread around the notion that they were fostering a community that was "stealing" as well as "sharing." Although the fiercely outspoken likes of Henry Rollins and Chuck D. are on hand for the sake of credibility, the only noted evidence of Napster's potential for breaking new music was some seemingly nondescript jam band out of Vermont called Dispatch, who better prospered in the YouTube generation when a 2012 album debuted in the Top 40. Truth be told, Napster was chiefly the support system for fiscally-strapped collegiates in need of instant gratification, as evidenced when Indiana University students prompted a ban on Napster after overflowing their network.

In Winter's hands, the history of Napster proffers another fable of youthful upstarts causing a paradigm shift against the old world order, namely the archaic Recording Industry Association of America and various artistic enemies in the major labels (see: Roger McGuinn of The Byrds calling out Columbia for stiffing him in royalties during Napster’s Senate hearing). Fanning and Parker’s then-naiveté is preserved in their adult incarnations, which only makes them more aloof and conspicuously cagey. For the considerably earnest and frail Fanning, it’s hard to escape the feeling that Napster’s gradual crash-and-burn did a number on his self-confidence. But Parker, who would go on to launch the now-controversial Spotify, still can’t get over the bogus blow to metal and gangsta rap “integrity” via Metallica and Dr. Dre's lawsuits. The latter figure barely makes an impression during the film, whereas the former band's betrayal of its fans is reduced to moronic grievances via Parker and some imbecilic interviewee from outside the Napster offices.

The lone revelation I gleaned from this movie was Parker's damning admission, in an e-mail that the RIAA discovered and milked for their prosecution, that the downloading community's anonymity be protected since they were essentially pirating. This continued protection hinders the movie since there is a gaping lack of testimony from people who actually used the service back in the day, thus depriving any further credence to Fanning and Parker's claims of legitimacy. Instead, this karmic leak drove a wedge between their partnership and left Fanning on his own to make unattainable amends.

Downloaded: The Movie comes across more like a comfortable assemblage of sound bites than a thorough, thoughtful time capsule. Alex Winter does put a "human face" on the subject of Napster with a genuine if not judicious fairness and certainly more sincerity than Lars Ulrich claims, but there's a considerable lack of focus and too many frivolous tangents in the montage suite, namely a potshot taken at two of the Spice Girls that embarrasses them more than the Metallica caricatures excerpted from a Joe Cartoon sketch. But you can’t expect an abundance of depth from a project funded and distributed by a cable channel which now effectively cares less for music than the Napster boys themselves did. This one’s worth watching once you can finally download it yourself for 99 cents or less. In fact, you can even stream it on AOL for free.
Posted by John Bishop at 10:28 PM No comments: