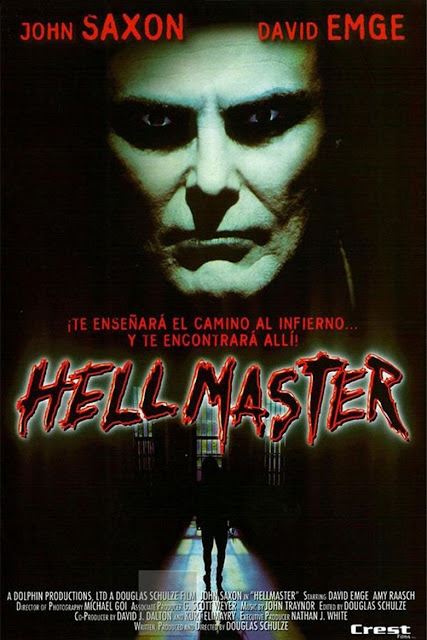 "God Is Dead," sayeth Friedrich Nietzsche at the start of multi-hyphenate Douglas Schulze's HELLMASTER. If the movie's title hasn't made clear, we are far from Pure Flix territory, so there's no Kevin Sorbo to be found (consider yourself safe). No, Schulze opens with that quote because we're dealing with a more traditional mad professor, the kind who wants the Almighty's position all for himself and proclaims that he has, indeed, murdered God in his maniacal labors. The kind who believes in survival of the fittest, making him a touch Darwinian in the bargain, and whose drug-induced method of creating supreme beings also has "pusherman" baked into his philosophy. Punishment and reward.

Our esteemed scag-shooter is Professor Jones (the great John Saxon), and once again, credit Schulze for going with the most obviously evocative surname imaginable. Exiled from the Kant Institute (hot damn, Philosophy 101 is written all over the architecture, too) for the habit of using students as lab rats, he managed to rebuild Jonestown in the nearby crackhouse to the shock of a reporter named Robert (David "Flyboy" Emge in a rare screen appearance), whose exposé was mutually sabotaged by the Dean/Professor Damon (Robert Dole) as well as Herr Jones. The disgraced Robert is now a hermit who lives in the abandoned chapel where Jones' experiments were once conducted, and where gallons of the experimental narcotic have been stashed in the steam tunnels. It's been 20 years since his fiery expulsion, but the presumed-dead professor has returned to the university with his small army of mutant derelicts to pick up where he left off.

Filmed in Pontiac, MI, over five weeks during the winter of 1989, with the Clinton Valley Center (or the Eastern Michigan Asylum for the Insane) doubling for the campus, Douglas Schulze's feature debut can be charitably termed the "old college try." Aside from writing, producing and directing, then-twentysomething Schulze also edited, served as art director and had a hand in set design. It's the ultimate independent movie juggling act, but Schulze ends up with many of the balls left in pieces on the ground.

Cinematographer Michael Goi has taken some phantasmagorical lighting cues from Dario Argento's Suspiria, and Schulze brings to mind the same stylish proficiency as Don Coscarelli and Sam Raimi. There are some unique touches such as the J emblem favored by the chief villain, a fascistic perversion of the sign of the cross, as well as the three-pronged syringe/claw and self-dosing catheter which are strapped to his arms. Professor Jones' megalomania opens doors for potential intrigue, as he is motivated to convert the Kant Institute's current student body over to his race of genetically-altered junkie killers. He also holds psychological dominion over the living, as he mocks one victim's fear of pregnancy as well as convinces an insecure, crippled boy to accept his miracle cure.

Unfortunately, said ideas tend to either get steamrolled by conventions or are undercut by terrible decisions in writing/editing. The aforementioned handicapped boy, Joel (Sean Sweeney), is introduced bemoaning his lot to his best friend and the movie's heroine, Shelly (Amy Raasch). He wants blond Barb (Lisa Sheldon) to notice him, but the object of his affection has not even been properly introduced in the film and we don't even know who he's referring to until twenty or so minutes later. The result is a shallow character whose disillusionment rings hollow even before he shuns his friends ("My handicap was born, yours was chosen") and stumbles into the sway of Professor Jones. There is no pay-off to Joel's ill-fated cross to the dark side; he's merely beaten to death with his own crutch and the result lacks any pathos (cf: the fate of Stephen Geoffreys' Evil Ed from the original Fright Night).

It's not just Joel who is shafted by Schulze's ineffective handling of his young characters, who seem to flit in and out at random and lack even a modicum of discernible personality compared to the usual dead teenagers. A similar lack of understanding ruins what should be a traumatic experience for heroine Shelly, whose brother Adam (Todd Tesen) works for campus security and is not only attacked by Jones' minions, but tied to the back of the patrol car and drug across the gravel until he manages to get himself free and crawl away to a future death. Only one of the victims leaves any concrete impression, and that's the determinedly unsympathetic Jesse (Jeff Rector), who we actually see as a bully and a sleaze. His opposite number, Drake (Edward Stevens), survives the film the same way he enters: blandly. 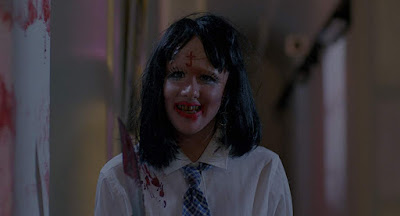 One would assume that the baddies make up for the loss of presence evident in the youths, but they look more interesting than they behave. Jones' ranks include a mutant boy (who we get a good look at before his transformation, sitting criss-cross in Jones' slum lab), a limping nun (played by Ron Asheton, the guitarist who egged on Iggy Pop in The Stooges) and one "Bobby Razorface" (Eric Kingston), whose similarities to Pinhead were not merely compounded by the Hellmaster title and marketing, but also by a scene in the actual film where, just like in Hellbound: Hellraiser II, he is confronted by an image of the human being he once was. But Schulze fails to deliver the new Cenobites in these junkie monstrosities, who aren't given any thing interesting to say and are allotted little imagination in their homicidal spree. Too often they'll stumble on a character, particularly Barb, and decide they're no fun to torture. Wasn't Jones supposed to be experimenting on these ciphers to begin with?

Even in the most undemanding mood, Hellmaster is confusingly tepid schlock. I've read reviews beforehand that mention a joke involving Shelly, who is the only actual gifted person in the entire student body, using her mind-reading powers to deduce that Jesse's douchebag behavior stems from growing up a bedwetter. If I had not bothered to seek out the Vinegar Syndrome release of Hellmaster, I'd wonder what the hell these writers were talking about because this very scene appears in an alternate cut of the film that is not called Hellmaster. Yes, there are two versions of this movie on the BD/DVD combo pack, and the one scanned in 2k (or in 4k, the box lists  both) from the elements is the "original theatrical version" titled THEM.

Having watched both Them and Hellmaster for this review, it's obvious that Douglas Schulze re-edited the movie directly for the home video market. This makes Hellmaster not simply a hack job, but a hash job. In the Them cut, we get a real introduction to Barb during the opening lecture instead of waiting a half-hour to find out whom Joel was referring to. We even get to see her walking past a throng of judgmental students who christen her the campus "slut." And her killing of the chemically-altered Joel at least puts Barb in a sympathetic state of shock, and allows for Shelly to grieve somewhat over what Jones did to her supposed best friend. Professor Damon is also more culpable for Jones' nefarious research as demonstrated in a flashback, and unlike in Hellmaster, which is rife with exposition dumps, this device doesn't come across as tedious.

It would be tempting to run through all the myriad changes between the two cuts, since Schulze's audio commentary on the Them version doesn't elaborate too much on the looped lines and increased attention to character. His yakker is actually a pretty dry affair, hobbled by the fact that he's watching this particular edit for the first time in decades. He tends to repeat the same anecdotes about the sets and pay the same compliments when he's not doing play-by-play after a spell of silence. But we do get some fun notes on how the padded cells of the Clinton Valley Center, which was still active, were used as production offices and rooms for the actors. And a few specific woes involving stolen generators and financial backing are compelling. Schulze and producer Kurt Mayry's mid-2000s commentary for the Hellmaster version is the more lively track based on Mayry's observation at the start: "This is version 200, I believe."

In both commentaries, Schulze is at least upfront about his deficiencies as a first-time filmmaker. Focusing too much on the technical aspects of production, he admits not giving his actors enough attention and is quick to point out how the proceedings devolve into camp. He wasn't particularly adept with writing dialogue and had to draft his brother into aiding the script. He was constantly incorporating new ideas into the project instead of developing them into separate entities. And he regrets not getting a "seasoned" editor to whip his film into shape, although his preferred Hellmaster edit is more the "glorified student film" compared to Them (Schulze claims it hews closer to the original screenplay). In the theatrical version, two separate monster attacks are crosscut and demonstrate some form of momentum; in Hellmaster, they play out separately and in linear fashion, but because one of them involves characters who were not formally introduced, the result solicits a shrug.

When you get right down to it, the Them cut is the far superior viewing option in terms of structure, pacing (though it runs a whopping four minutes longer than the director's cut) and simple visual quality. Schulze and Mayry point out that the Hellmaster cut, ported over in SD from the 2006 Mackinac Media release (as is their commentary), was composited from an early ‘90s answer print as well as the original negative. The 1.33:1 image looks like it came from a deteriorating VHS copy, full of snow and murkiness and faded colors. Vinegar Syndrome's treatment of the theatrical print is the undisputed keeper, presented in 1.85:1 widescreen and with far more loving care tended to Michael Goi's cinematography, where primary colors are lit up so bright as to distract from the decrepit buildings where Schulze was filming. Despite some noticeable negative damage, the image is natural 35mm goodness, with tighter black levels and more radiant reds and blues.

The DTS-HD MA track is in 2.0 stereo and while some of the dialogue suffers a lack of real fidelity (John Saxon's introduction, in particular), there is a more-than-sufficient punch to Diana Croll & John Traynor's synth-gothic score. Optional English SDH subtitles are available on the Blu-Ray copy. Beyond the feature(s) and their respective commentaries, the newest and best extra is a new 26-minute video interview with Michael Goi called "Creating Reality," in which Goi admits that they were aiming for something opposite what the subtitle implies. He also recalls turning Schulze onto Suspiria for the first time and the director's immediate reaction to it when Mayry walked in on the screening, and Goi also credits Mario Bava's Black Sabbath as an influence. Goi is eloquently realistic about the process of filming on a tight budget in terms of conception vs. execution (his career is to make compromise seem intentional) whilst recalling certain issues with lighting, shooting around John Saxon's limited schedule and working in the dead of winter.

The AIP Video trailer for Hellmaster, a brief gallery of conceptual art (including posters for Them as well as one for the alternate title of "Soulstealer"), a second short gallery of behind-the-scenes stills, and a four-minute location scouting video showcasing the Clinton Valley Center (and scored to backmasked, industrial-sounding Muzak) round out the bonuses. The die-cut slipcover designed by Chris Garofalo for the limited edition release offers a nice fiery orange in the shape of the J-symbol and there is the reversible cover art that includes the Razorface close-up which got the film its minor notoriety on videocassette. In lieu of a trailer, I close with some behind-the-scenes footage not available on the Vinegar Syndrome release but is on YouTube for the curious.

Posted by John Bishop at 8:26 PM No comments: