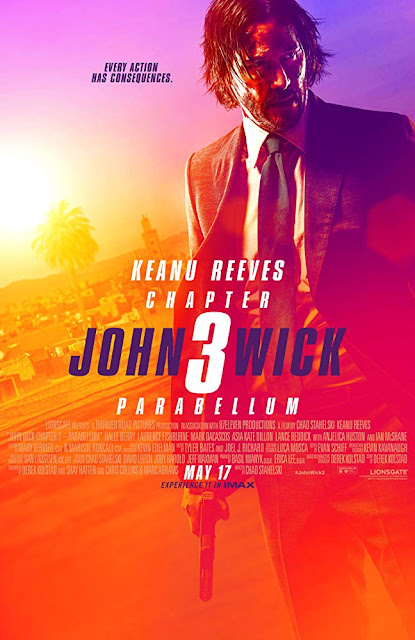 Not only does Keanu Reeves' pistol-packing "boogeyman" bleed throughout the course of JOHN WICK: CHAPTER 3 - PARABELLUM, but the tagline could have read "More of the night he couldn't come home." In the original John Wick, the sanctity of his abode was violated by Slavic thugs and resulted in the stolen car and murdered dog that brought him back to the gruesome lifestyle he worked to retire from. Chapter 2 simply burned that shelter to ash thanks to the Italian schemer who demanded Wick honor a blood debt to usher him into the assassin's version of the Round Table. This loyalty was rewarded with a $7 million price tag for Wick's corpse, and as the series picks up where we left off, that bounty has doubled now that Wick has been declared excommunicado, leaving him nowhere to hide and with more enemies than allies, to put it lightly.

Frantically surveying the final 30 minutes of his running start, and being treated for a puncture wound as the last seconds are counted down (the doctor played by none other than the Keymaker himself, Randall Duk Kim), Wick gives chase during the first act of Chapter 3, marshalling whatever reluctant resources at his disposal into guiding him towards making amends for his life-threatening transgression. The High Table, that aforementioned shadow committee whom Wick defied in his murder of Santino D'Antonio on consecrated ground, has sent an operative known as the Adjudicator (Asia Kate Dillon) to ensure those who abetted Wick swear their fealty anew or pay the gory consequences. The life of one dog doesn't amount to a hill of pencils in this universe.

Series director Chad Stahelski inherits the thankless task of expanding the most meat-and-potatoes motive for revenge into a full-blown mythology where for every 25 kill shots to the head, there's a solemn vow or an existential crisis. John Wick's laser focus and five-star survival instincts, reflected in the giddy ultra-violence that has been packing them in, is bound to be recalibrated once again at the cliffhanger ending of Parabellum, which really does prepare you for war.

The NYC Continental, the scene of Wick's disgrace, becomes ever more the battleground this time, with manager/mentor Winston (Ian McShane) and concierge Charon (Lance Reddick) up to their torsos in spilled blood. So is Wick, who calls upon the Russian ballet instructor/mercenary trainer (Anjelica Huston) of his orphaned youth ("I am Jardani Jovonovich") to tear his "ticket" to Casablanca, where he seeks further assistance from Sofia (Halle Berry), manager of the Moroccan branch of the Continental. Both Sofia and the Director are amusingly blunt about the danger Wick's presence will surely invite, represented by the Adjudicator's hired cadre of sushi-serving shinobi (a couple of whom are veterans of Gareth Evans' The Raid). Their leader, Zero (Mark Dacascos) is starstruck at the opportunity to combat Wick and proves a more formidable foe than any of the brats Wick has perforated previously.

There was a time before Point Break erected his action hero stature in earnest where Keanu Reeves' prime talent was for comedy (the Bill & Ted adventures, Parenthood, I Love You to Death). The John Wick persona not only refines what made the 54-year-old actor such a draw in the Speeds and Matrices of yore, but has allowed Reeves to channel his droll timing into a Zen-like sarcasm. When Wick makes his initial errand at the New York Public Library, an ogre (Boban Marjanovic) is there to collect early on that $14 million contract. It's a lot of money, the giant reasons, but "not if you can't spend it," Wick retorts. The ensuing scuffle is as much a knockout for the viewer, with Wick using one of the many found weapons at his disposal, a book of Russian fairy tales which doubles as his storage locker, to make his towering foe practically eat his words.

Stahelski, Reeves' ex-stunt double made good, alternates confrontations like these, boffo and balletic simultaneously, and graced with the proper amounts of wry humor, with plenty of screw-turning surprises. At one point, Wick finds himself up against the High Table's very own SWAT team, all of them armored to a tee, which puts welcome strain on Wick's God mode-style impenetrability. In a reprise of the shopping montage from Chapter 2 ("I need something robust...precise"), Wick has to march back to the weapons room and upgrade his arsenal with hilarious frustration. Another spin on the second film has the museum installation showdown, previously involving Mr. D'Antonio, moved to a hall of glass panels and crystal skull displays, which ups the ante on an old action movie chestnut in a nervously rousing style.

This is where the final confrontation occurs between Wick and Zero, and it has to be said that Mark Dacascos, the Iron Chef who was once a leading man of martial arts vehicles in the days when the late Brandon Lee was similarly poised for stardom, reminds me of all the fine qualities that Lee demonstrated in his tragically short career. There is a boyish enthusiasm and elation in his scenes with Wick, including one of those uncomfortably silent truces between professionals itching to beat each other to a pulp (cf. Common's Cassian and Wick demonstrating their "professional courtesy"). The way Dacascos breaks the ice in that moment is priceless. And he matches Wick's never-say-die prowess with every particle of his being.

Laurence Fishburne, parodying Morpheus as a gloating pigeon whisperer, returns as the Bowery King, and without giving anything away, he's like the upscale Winston in he refuses to give up his turf without a self-righteous but sassy vengeance. Anjelica Huston, who has drawn flak for asking that her golden years allow her more dignified roles than that of sitcom-style geriatrics, makes the most of her snarling cameo as The Director, and in much the same way that Ian McShane (excellent, it should go without saying) wrings the right amount of subtle cockiness in the way he says "Enjoy your stay at the Continental," there is a recurring line throughout Parabellum about service that are like verbal bullets the way Huston spits them out. Halle Berry is in prime form, too, freshly adrenalized and endearingly surly as the tragic hotel proprietor who shares Wick's fondness for dogs. In Sofia's case, her best friends are two Belgian Malinois who defy the odds to turn junkyard nasty after a pivotal interrogation.

The union of star and director, however, remains a tailor's dream. Keanu Reeves, the once and future Wyld Stallyn, continues to step up his game and throw himself into a new variety of mano a mano overkill. Stahelski's continued attention to unbroken shots and spatial detail, which is where you'll once again find the projected image of Buster Keaton, brings urgency to even the most incredulous of circumstances. The Cannon films of the ‘80s which touted Bronson and Norris never once had their He-Men switch to riding side saddle in Manhattan traffic to get that perfect aim, nor were they blessed with directors as inventive as Stahelski. His style is a Cuisinart of at least 10 feverishly adored pulp filmmakers, from Walter Hill and John Carpenter to John Woo and Kinji Fukasaku, but with its own sardonic, soulful personality. Granted, its two-hour length does causes one to suggest further tightness, yet Reeves' charisma and Stahelski's color ensures perpetual investment, excess and even pleasure. Wick breaks into an antique shop in a futile attempt at coveting firepower, but ends up making human pincushions in a frenetic knife fight that awaits to be topped.

John Wick: Chapter 3 - Parabellum expands upon the brutal truth that John Wick may thinking, yeah, he's back, but that the consequences have effectively cost him any true peace until the entire system of safe havens and bureaucrats and top-ranking mobsters consumes itself whole. When he finally gets his meeting with the Elder (Said Taghmaoui) out in the Moroccan desert, he fights to reaffirm his life for love, but both his sacrificial offering and the task assigned to him push him further into the mythology of John Wick, the nightmare vision of the criminal overworld (I don‘t call it underworld because of that climax), and away from the man he was just weeks earlier. Keanu Reeves' face is that of a samurai warrior lost at the bottom of the pond he got sucked into. As a matter of fact, John Wick truly IS the boogeyman. Here's hoping Stahelski and Reeves carry on like they do until Wick's reckoning day.

(If you liked this take on John Wick: Chapter 3 - Parabellum, and have the means to support further reviews that would also benefit me in a time of need, please donate via the PayPal button or through this GoFundMe campaign that is dedicated to the memory of Gertrude Bishop, August 23, 1934-May 2, 2019)
https://www.gofundme.com/4ufnd-emergency-rent-payment