The Devil's Men (Land of the Minotaur) 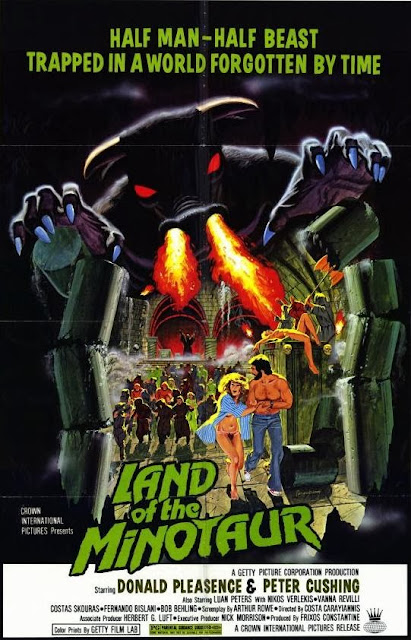 The Minotaur of ancient Greek lore, born with a human body but also the head of a bull, was a bestial abomination that had to be contained in a labyrinth used for ritualistic child sacrifices, where it was eventually slain by Athenian hero Theseus. In classic literature, Dante revived the legendary beast by locating the Minotaur in the seventh circle of his Inferno. Recently, the TV series American Horror Story put a perverse spin on this interspecies image via the employment of a serial killer. But not too many films have acknowledged the existence of the Minotaur, save for the first Percy Jackson adaptation, naturally, and David Wain's child-care comedy Role Models, in which Paul Rudd and Seann William Scott were shilling an energy drink of the same name.

If you need proof of just how hard the mighty have to fall to agree to be the mascot for carbonated Toxie piss, look to 1976's Land of the Minotaur, initially known as The Devil's Men prior to its American theatrical release through Crown International. The independent studio, in that time-honored huckster tradition, used a lurid one-sheet to dupe audiences into expecting a creature feature along the line of, say, Equinox. The actual movie instead owes more to antecedents such as The Wicker Man and The Texas Chainsaw Massacre, detouring away from rural England and rustic America to situate itself in Greece, with all three territories unionized as producers. Greek-savvy grindhouse scholars will best remember this region as the site of Nico Mastorakis' Video Nasty reprobate Island of Death, and it would appear the Greek film industry was poised to gain the most from this United Nations of exploitation, from the location scouting right on down to the director being Kostas Karagiannis, who may as well be considered the Baltan Jess Franco based on the evidence herein. 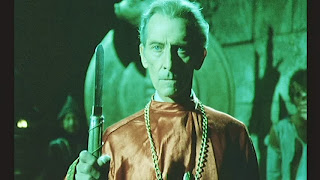 Even the film's imported name actors don't really make that much of an impression, which is quite shocking considering they're horror icons Donald Pleasance and Peter Cushing. In short time, they'd both be considered for a career-defining star performance in John Carpenter's Halloween with the victor being Mr. Pleasance, who also carries this film along in a manner similar to the character of Dr. Sam Loomis. Here, it's as Father Roche, an Irish Catholic priest living on the isle of Minos who is concerned with the unsolved disappearances of an Englishman and a French woman during an expedition. Sure enough, further lambs show up when Australian archaeology students Ian (Nikos Verlekis) and Beth (Vanna "Gelsomina" Reville) pay Father Roche a return visit with a friend from Boston named Tom (Robert Behling, the male lead from Island of Death) in tow, seeking out the locale where a bull-headed trinket was discovered. They sneak out of their hospitable old friend's quarters and become missing persons to the shock of Tom's girlfriend Laurie (minor Hammer starlet Luan Peters), who was invited by letter to take a flight out to see him.

Thus desperate Father Roche places a call to New York City asking for the favor-returning aid of private investigator Milo Kaye (Kostas Karagiorgis, billed here as "Costa Skouras"), duly introduced during sexy time in a scene that without doubt was edited heavily for the PG-rated U.S. version. At least in the uncut version, Milo admits a debt of gratitude is owed to Roche amidst servicing his nude blonde mistress (Jane Lyle, the other half of the incestuous sadist couple from Island of Death), although it doesn't fully excuse his complete irrelevance to the ensuing non-action (if you like your heroes six steps behind the villains at all time with frequently dumbfounded looks in their eyes, Milo and Roche are a godsend)  or the insufferably unfunny arguments between the supposed old friends over Milo's reckless driving. Also truncated for mass palatability were some mild gory violence and sudsy shots of a barenaked Luann Peters, although like the Milo Kaye character, her damsel-in-distress duties as the objectified Laurie were also thanklessly rote.

All three of them cross paths with Baron Corofax (a slumming Peter Cushing, clearly on holiday), a Carpathian expat as snobbish as he his shifty. Corofax is the high priest of the underground temple of the Minotaur, presented here as an anatomically-correct(!) stone idol who sneezes fire and bellows, with all the gravity of a monster truck show announcer, death threats to the hippie outlanders in its presence. Undead minions proceed to terrorize the trio, particularly helpless Laurie, whilst visions of Father Roche's intended murder on the altar are telegraphed to Beth and the Baron to no consequence, as the priest duly kicks ass for the Lord with hosannas and holy water.

You'd think that given the already sensational origins of its chosen deity, Corofax and the rest of the suspiciously civilized populace would be spilling the blood of their own children in their eagerness to appease. Alas, The Devil's Men boringly sticks to "death of the summer of love" sub-textual ciphers, all scruffy facial hair and denim hot pants, hardly worthy of the tragedy that befell anyone in the original Texas Chainsaw Massacre. The Baron's own raven-haired brood stares ominously at Laurie, the better for the director to abuse close-up reaction shots more numbing than nefarious. Karagiannis comes across as a Greco-Roman hack job of the highest order, not just in representing his native land on film but in relying too much on shock-cut editing and zooms to disorient when all they do is distract. And the dialogue from teleplay veteran Arthur Rowe is a shambles too, making references to character details of jarring inconsistency (Father Roche lacks the finesse and beleaguered conviction of the later Dr. Loomis, coming across more like a crusading crackpot and perpetual nag) and conversations never held, all delivered by badly-dubbed, bored-sounding English speakers even in the case of Cushing and Pleasance.

However, the most curious credit in the entire film is that of the composer, electro-ambient icon Brian Eno. The score sounds exactly like you'd expect a slasher movie soundtrack would as churned out by the former Roxy Music knob-twister, only somehow more annoyingly atonal than atmospheric, and it makes Rick Wakeman's later work on The Burning sound like Bernard Herrmann in contrast. The only interesting thing about the rock ‘n' roll tune played during the end credits ("Devils! Demons!") is that it may have been used as flimsy evidence of the genre's corruptive influence in that infamous 1982 Christian propaganda film Rock: It's Your Decision.

The Devil's Men has the pacing of a funeral procession, the scare factor of a tabby kitten and enough squandered resources to instigate a massive government bailout. You'll pine for the tender "boy meets goat" romance of Island of Death if only for the element of surprise this film never offers you. The PG-rated Land of the Minotaur edit has fittingly made the rounds in multiple cheap DVD bundles of Crown International titles through Mill Creek Entertainment. Code Red and Scorpion Releasing have kept this film's reputation as a mere place-holder alive thanks to their own competing double-feature releases under their "Maria's B-Movie Mayhem" and "Katarina's Nightmare Theater" catalogues. In this battle, the edge once again goes to Katarina and friends since they've inaugurated the first official American release of the R-rated The Devil's Men (it's too tame to be deemed "unrated" as the box specifies), restoring all that precious T&A to a movie already too passionless to waste your seed on, demonic or not.
In lieu of a trailer or TV spot or radio ad (none of which are available online), here's a nostalgic link to the Commander USA's Groovie Movies presentation of Land of the Minotaur...

Posted by John Bishop at 2:35 AM No comments: