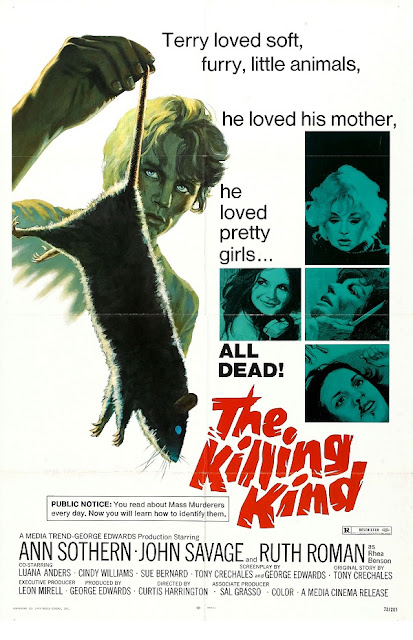 A singularly nasty if hopelessly sketchy revenge drama, Curtis Harrington's The Killing Kind takes the loss of innocence to some unpleasant extremes. It begins with 19-year-old Terry Lambert (John Savage) bullied into sex with 17-year-old Tina Moore (Sue Bernard) under a beach pier. Terry's subsequent incarceration shifts the mantle of victimhood from the assaulted girl to the reluctant rapist, who is released from prison two years later, reduced to an impotent creep goaded on by the eccentric older women in his orbit. Resentful and disturbed enough to find pleasure in demonstrating the proper use of a mousetrap, Terry escapes from the smothering bosom of his mom, Thelma (Ann Sothern), to seek murderous retribution against his female oppressors. But when will he stop? Can he stop? And which of the ladies in his life are going to finally wise up and stop him?

If Psycho IV: The Beginning had been a grindhouse programmer from the early 1970s, it would certainly resemble The Killing Kind. Actually, there are some ace cards in Harrington's deck that Mick Garris wasn't dealt, namely the gauzy but accomplished cinematography from Mario Tosi (Carrie, The Stunt Man) and a liberated performance from Ann Sothern, whose over-the-top hag routine gives way to a wrenching isolation that, bizarrely enough, provides the most well-rounded characterization in the cast.

"It must be wonderful...being raped," goes an actual line of seduction aimed at Terry from Louise (Luana Anders), the repressed librarian who witnesses his violent behavior in the presence of aspiring model Lori (Cindy Williams). Stuck caring for her senile father (Peter Brocco) so as to avoid being lonely, Louise drunkenly admits her darkest secrets to Terry but is rebuffed for her honesty. The next day, when Terry viciously rejects her studious apology, she is ennobled to tell a similarly insulting truth in regards to his musical inability. Luana Anders, an underground actress who was tight with Jack Nicholson and Sally Kellerman, exudes such a strange sexiness in her supporting performance that I wished Louise would've dominated the last act more so than Lori and Thelma. 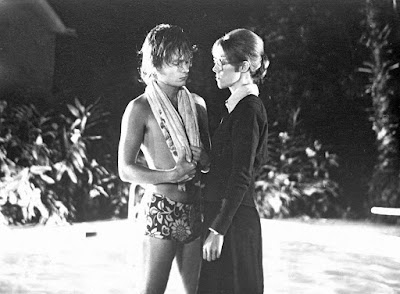 If Louise were more integral to the story at hand, The Killing Kind could've emerged as subversively kinky in its psychosexuality. Her words combined with Tina's actions imbue the film with a daringly pro-rape bent, but the film is ultimately too episodic and slavishly devotional to Alfred Hitchcock and Robert Aldrich to really develop a brazen identity of its own. Though Curtis Harrington means to pull us inside Terry's mind, he alternates camp and sadism with confident if still jarring results. A nightmare sequence in which in Terry finds his fully grown self back in the crib, with Thelma's aging tenants going from awestruck to condemning as Tina is thrown into the mix, is like failed comic relief to relieve us from Terry's attempt to strangle his mother during a neck massage.

These moments are grounded in Thelma's incessant doting over the son whom she still believes is essentially a "good boy," which is consistent as far as she goes. It's all bottomless glasses of chocolate milk and snapping photographs of her boy at every opportunity, even in the shower. But with Louise almost completely absent from the moment Terry smashes his guitar, the ancillary character of Lori has to defy common sense by coming onto the very person who nearly killed her in the pool and slashed her underwear before inspecting her broken shower head. It's hard to reconcile the pretentious and the sordid, and The Killing Kind is another testament to that dichotomy.

The real MVP of The Killing Kind, more so than rising stars John Savage (The Deer Hunter) and Cindy Williams (American Graffiti), is Ann Sothern, fresh off a string of midlife triumphs opposite Lucille Ball and Henry Fonda. She sells the brassiness, codependency and shame which Thelma progresses through. In spite of the faulty screenwriting and faded glamour, the sexagenarian Sothern allows Harrington the prickly poignancy he's constantly shooting for. It's Sothern who awards The Killing Kind its semi-respectable pantheon in the field of unjustly obscure early ‘70s thrillers, which is more than can be said for Harrington's later leading ladies, be they the talented Piper (Ruby) Laurie or the tarnished Sylvia (Mata Hari) Kristel.

But those two films had also had Dimension Pictures and Cannon Films as their distributors, so Harrington's lesser efforts at least were run through quite a few projectors in their day. The Killing Kind wasn't so lucky; it was treated as a tax deduction for Media Cinema Group, provided it only appeared in a bare minimum of theaters. And since no record was kept of the places where it played, Harrington couldn't court wider distribution from any other potential takers. The movie had numerous VHS releases and pay-TV saturation (cf: the Cinemax advert linked at the end), yet it was never released on DVD until after Harrington's death in May 2007.

That previous Dark Sky Films acquisition has now been supplanted by Vinegar Syndrome. Presented in 1.85:1 widescreen, there are handy screencaps at Mondo Digital of both the DS and VS transfers. The latter's been scanned in 2k from the original negative, and it bests that old anamorphic DVD in all regards.  Not only is there more detail on all corners of the frame, but the film's naturally grainy and glazed look is preserved with less cosmetic chicanery. Skin tones, costumes and outdoor foliage all appear with top-tier clarity and far less waxiness. Black levels and shadow details strike a proper balance given the constant darkness in which Terry acts out his malevolence. There isn't a wealth of distracting print damage, though a film of this vintage has its jittery moments. The color palette on display is superb throughout. Audio is strictly DTS-HD MA in mono, and it surpasses the source's limitations, but there is an option to listen to Andrew Belling's isolated score in Dolby Digital 2.0.

The bonus features are not as screen-specific as one would expect, instead taking a broader and more anecdotal perspective towards Curtis Harrington himself. In addition to a 22-minute interview with the director ported over from the Dark Sky disc, the 24-minute "Harrington on Harrington" featurette directed by Jeffrey Schwarz and Tyler Hubby is preserved on the Vinegar Syndrome release. Combined, these oft-overlapping interviews do give you a sense of Harrington's bizarre career trajectory, from humble beginnings to courting Kenneth Anger all the way to Paris to his renown in both the horror cinema and melodramatic TV fields. He touches on the double-dealings which caused The Killing Kind to go down in a blaze of obscurity, but both of these bonuses are more about the journeyman and his path, with a larger discussion of his work as a whole and the industry connections he made.

Two people who had their own connections are the Davids Del Valle and DeCoteau, the former being the recognized raconteur of fringe cinema and the latter being the exploitation workhorse who is a Vinegar Syndrome staple thanks to Nightmare Sisters and Murder Weapon/Deadly Embrace. Del Valle was a long-time friend of Harrington (introduced thanks to Robert Bloch and Forry Ackerman) and is thus able to be upfront about his unpredictable personality as demonstrated on this joint "historical" audio commentary track. He also appears to have worked as an uncredited production assistant on The Killing Kind, but the esteemed film historian rarely dishes any trivia endemic to the feature presentation. DeCoteau, meanwhile, was more serendipitous in his meeting Harrington (via Fred Olen Ray via producer/screenwriter George Stevens) and Ann Sothern. It was under the wing of Killing Kind production manager Sal Grasso, a.k.a. Steve Scott, Sal's nome de porn (both adult movies and pseudonyms would become crucial to DeCoteau's own resume), that DeCoteau was hired as Sothern's driver and assistant.

What you get from this combination is a lot of frequently amusing, occasionally hilarious stories which do justice to how ostentatious and outspoken both director and star could be. DeCoteau crashed his car at the behest of Sothern en route to a restaurant; Del Valle remembers Harrington's feisty response to a rough cut of Top Gun pre-Kelly McGillis. There are also laughs at the participants' expense. When Ruth Roman appears in The Killing Kind as Terry's failed defense attorney, former Corman employee DeCoteau recalls the time he sent Roman's agent the script for Galaxy of Terror (specifically, the role which went to Grace Zabriskie) convinced she'd take any job if she was willing to appear in, say, Day of the Animals. Granted, both are catty camp connoisseurs of the highest order, so they go back to 1974's Impulse, which in which she starred opposite William Shatner in another script from Killing Kind story writer Tony Crechales, to marvel at Roman's schlock discrimination.

Del Valle and DeCoteau are still a hoot, and have been teamed up many times in the past so that their chemistry is shatterproof. But still, I can see some point where they could ease back on the six-degrees associations and get down to maybe talking about behind-the-scenes facts related to The Killing Kind. The IMDb page includes several interesting notes not found in Harrington's interviews nor David & David's commentary: the most fascinating was a scene that was cut to Harrington's dismay because producer/co-writer George Edwards was being pressured by a distributor. In it, Terry is further tormented by the sight of Tina having carefree sex that belies whatever "trauma" she experienced that day on the beach. Again, it has to be said that The Killing Kind has a charge to it whenever it concentrates, as cruel and thorny as it becomes, on the shattered sexuality Terry fails to recover. That combined with Ann Sothern's work makes this one of the better Vinegar Syndrome catalog titles I have seen recently, and I can keep this pilgrimage up for days.