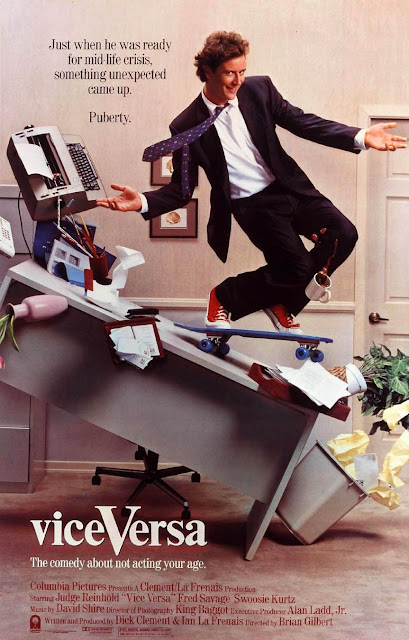 No sooner has thirty-something department store VP Marshall Seymour swapped minds with his 11-year-old son Charlie than the newly-transmogrified Marshall offers auto-critiquing reason from the mouths of babes: "Maybe this happened all over America. ‘Invasion of the Body Switchers!'" 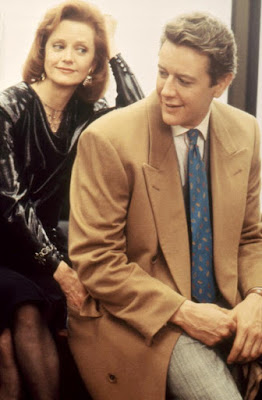 That was surely the only explanation behind a lot of family entertainment in the late 1980s, the New Wave of "I'd Like to Be You for a Day" tall tales in the mould of Freaky Friday. It began with the Tri-Star Pictures release of Like Father, Like Son, followed on close heels by Vice Versa from Tri-Star's parent company, Columbia Pictures. Both of these Sony properties as well as the lesser spawn from B-movie houses New World (18 Again!) and Vestron (Dream a Little Dream) all got creamed by the Oscar-nominated Big, which grossed more than the sum of all four pictures.

That Penny Marshall blockbuster had been kicking around Hollywood for a while, which can make sense on a basic exploitation angle in regards to such a craze. But in the case of Vice Versa, the producers/screenwriters looked even further backwards to the first well-known artifact of the switcheroo story, Thomas Anstey's 1882 novel of the same name. That tome had already been adapted multiple times in its native England, including a 1948 full-length from director Peter Ustinov which starred both a young Anthony Newley and future pop star Petula Clark.

Anstey's name was absent from the promotional materials for the film, however, so maybe creators Dick Clement & Ian La Frenais would be seem more inspired by Lorne Cameron's story idea for Like Father, Like Son. Cameron's not-so-original concept, which roped in The Sure Thing co-writer Steven Bloom, wasn't predominantly well-received in its final incarnation, directed by Rod Daniel (Teen Wolf) and starring Dudley Moore and Kirk Cameron in the reversed roles. Dudley's star was waning so poorly at this time, he couldn't even justify Arthur 2: On the Rocks, and Kirk would effectively avalanche his film career with two words: Saving Christmas.

As down as I was on Little Monsters and The Wizard, at least Fred Savage grew up to better things, mainly as a high-profile TV director whose credits include It's Always Sunny in Philadelphia, Party Down, Modern Family, Garfunkel and Oates, and 2 Broke Girls. Released a month after The Wonder Years premiered on TV, Vice Versa stands up as the film which demonstrated Savage's potential the best, an infectious dual showcase for both him and adult co-star Judge Reinhold.

Reinhold, of course, became famous early on as hapless Brad Hamilton from Fast Times at Ridgemont High in 1982 and as Axel Foley's buddy in the Beverly Hills Cop series. Not too many people care to remember either Head Office (from the director of Grease 2 and Airplane 2) or Off Beat, which presented Reinhold as romantic leading man, although the later does boast Heaven Help Us director Michael Dinner as well as supporting roles for Meg Tilly and Harvey Keitel. Vice Versa, along with the Nic Cage notoriety Zandalee, were singled out as a hipster joke when Judge lived up to his stage name on an episode of Kevin Smith's animated version of Clerks.

Maybe the fact that I like Vice Versa ought to sentence me to watch Jersey Girl, but I'd rather plead insanity. 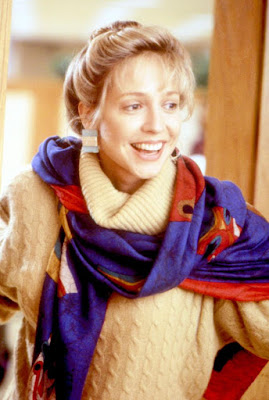 Anyway, Judge Reinhold is Marshall Seymour, an executive at Chicago's Stanford & Avery who specializes in buying overseas toys for distribution. The trouble is Marshall isn't a particularly playful man, more an overworked divorcee who never seems able to catch a break in trying to spend quality time with his son Charlie (Savage), a rock music enthusiast who favors the drums. Charlie is set to spend a week bunking with his dad at his tidied-up apartment, but first Marshall takes a business trip to Thailand with his girlfriend/co-worker Sam (Corrine Bohrer). While away, Marshall is duped by a shady pair of antiques collectors into smuggling a bejeweled skull of Buddhist black magic, which activates once a heated argument between Marshall and Charlie ends on the declaration of a wish to trade places.

Marshall is now a prissy, precocious tot negotiating the life of an elementary school shrimp, and Charlie enters his father's adult world of aggressive business deals and office romances.

Any synopsis of Vice Versa can pretty much end there. The film breezes along on a batch of scenarios that finds Marshall, now "6-foot-2, with the brain of an 11-year-old," winging it through conference calls at work and Charlie's school, whereas the hyper-mature Charlie becomes a wry stranger to his juvenile environment. Eventually, the bickering jewel thieves (Swoozie Kurtz, David Proval) scheme to get back the gold-studded trinket and further complicate matters. 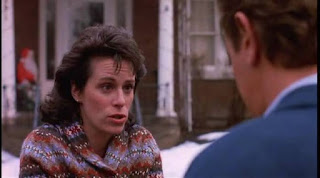 Vice Versa, directed with plebian thrust by Brian Gilbert, is the Webster's definition of lightweight, bogged down by nothing which would compromise its lassez faire goofiness. When Marshall/Charlie deduces how much of a "Freudian nightmare" it would be to live another life pretending to be the son of his ex-wife Robyn (Jane Kaczmarek), the possibilities end there. Instead, his burgeoning courtship of Sam is plumbed as she and Charlie/Marshall go out on a date to see the boy's favorite metal band, Malice. The emotional complications of such, like the fact that it is Charlie's first kiss in an adult avatar and the reactionary jealousy of Marshall as acted out by a prepubescent boy, are never exploited and rather patched up with sitcom-friendly spackle.

It's all so inconsequential, right on down to the kidnapping of Charlie, whose calm reasoning boggles his captors ("Have you done this before?" asks Proval's henpecked henchman), and the resultant chase to catch their train and retrieve the idol. Short Circuit 2 has more grit than Vice Versa.

At least it's not insufferable, and a large part of the film's passing charms are due to the central performances by Judge Reinhold and Fred Savage. Reinhold has the most fun of the pair relishing his newfound big boy status, whether instigating a musical jam session on a sales floor (which proves a fluke of dumb luck in terms of business strategy), latching onto various innuendos like "unit" and "ball buster" or, in the film's uproarious highlight, putting the screws on a trio of bullying "barf bags" by posing as "Calhoun, high school patrol." Reinhold's physicality is as amusingly gangly as it is elastic, and he graces even the most incidental moments with a spark of good humor.

The young Mr. Savage also rises to the comedic challenge as a cynical tot slurping down gin and tonics and spitting rapid-fire commands at anyone within earshot. He gets a lion's share of the one-liners, like when he first returns to school with his father's soul inside him and is patronized by a teacher when asking for directions on where to go. "I asked a straightforward question," he retorts. "I'd appreciate a straightforward answer." As a result, Charlie gets led by the ear to the principal's office. 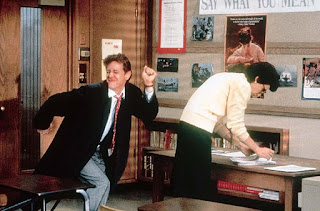 Writers Clement & La Frenais don't appear to make much of an effort in delineating Marshall and Charlie from the outset beyond the most basic of character strokes. Thus the double act of Reinhold and Savage playing well past/behind their years isn't so much a spectacle of specific impressions as much as archetypical vessels meant to be filled by the efforts of the performers. This creates yet another hindrance to the story, as Reinhold and Savage are given to generalizations, like when the former screams "No way!" upon the news that Charlie's dowdy instructor Mrs. Luttrell (Beverly Archer) misconstrues a love letter as directed towards her, or when the latter bungles his hockey practice by clumsily strolling along the ice and giving his coach a high stick to a low area. 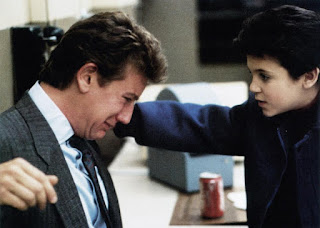 Reinhold and Savage make wonders out of their every moment, though. Luckily, the supporting cast also includes future Malcom in the Middle materfamilias Jane Kaczmarek, a fleeting early appearance by a curl-lipped Jane Lynch (who would go on to MVP status in her own right), James Hong from Central Casting's Oriental Division, and a very nice, warm turn by Corrine Bohrer as the love interest Sam. Bohrer, for the record, had done more than her share of schlock by 1988, as credits like The Beach Girls, Zapped!, Joysticks, and Surf II demonstrate. It's refreshing to see her bounce off the game, energetic pair of Reinhold and Savage in this capacity.

There's nothing Gilbert and the writers/producers bring to the table in regards to father/son relationships that is either inventive or innocuous. Nor, as I said, to they really aim for subversion on the level of a Joe Dante or Bob Zemeckis. Vice Versa is simply ambling innocence personified. But as I reached the end of the movie, which is unfortunately capped by a Diane Warren-penned, Peter Wolf-produced (and no, not the J. Geils howler) tune by the dread Starship (it wasn't a hit, so they mercifully ended up stopping now), I decided that my smile was as good a recommendation as this film deserves.

Besides, who needs to overdo it when you've got the Honorable Judge Reinhold to make his stand? The defense rests.

Posted by John Bishop at 1:53 AM No comments: