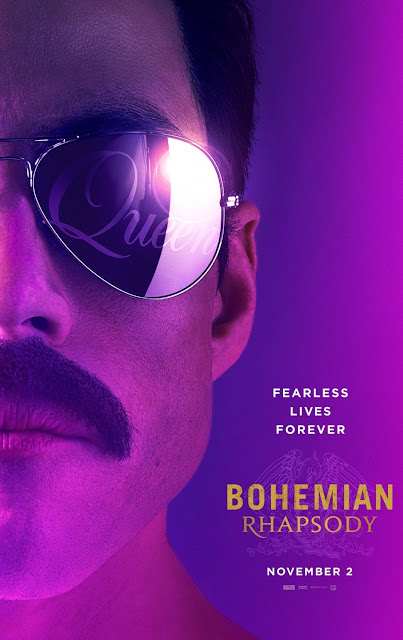 It's 10am on a Saturday, and I figure coffee can't compare to a shot of Queen's incomparable pomp rock in seat-shaking Dolby Surround. That's not a backhanded compliment for the record: Queen are perhaps the only real combo who made bombast sound fun. An old Rolling Stone article declared Queen "the first truly fascist rock band," and those late ‘70s anthems have a jackbooted arrogance to them. But if they didn't have hooks, energy and especially Freddie Mercury, I could hold no nostalgic yearning for them. They'd slot easily into the same AOR ghetto with Journey, Styx and REO Speedwagon, all of whom pale in comparison to the Mercury-May-Deacon-Taylor music machine.

But as Bohemian Rhapsody, the band-sanctioned biopic of their rock ‘n' roll reign, concluded with an abridged recreation of the 1985 Live Aid mini-set which showed them at the height of their power, I surrendered. It's all in the tune of "Radio Ga Ga," the Roger Taylor-penned hit from 1984's The Works (it only went to #16 in the U.S.A., but was a chart-topper or a notch close to such in 14 countries). It's got the martial beat, the synths, the note-bending guitar, the shout-along chorus, the earnest lyrics mourning a format which means even less almost 25 years later. It's sounds stripped down compared to the band's flamboyant first decade, a credit to the evolution begun with the pop-minded 1980 LP The Game. And I sang along to it in the theater shamelessly, or at least the first verse and final chorus.

Then there's that titular behemoth, a song whose pop-cultural revival is the stuff of legend. There are even text graphics filling the screen which shows just how reviled Queen were in 1975, when they embraced rock and opera with the kind of kitsch abandon even Pete Townshend was too reserved for. But cut to 1992, after the death of Freddie Mercury, and a little movie called Wayne's World is released on Valentine's Day, the better to plant a big wet kiss on the kind of music which punk and metal were meant to discredit. Wayne Campbell, Garth Algar and friends singing along, banging their heads, weeping to the fatalistic coda; it was a glorious sequence which began the revitalization of Queen. 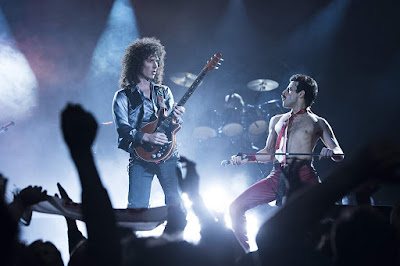 Not a lot of bands deserve such an afterglow, but Queen did. Looking back on the jewels of their discography, from "Killer Queen" to "You're My Best Friend," "Somebody to Love" to "Bicycle Race," "Another One Bites the Dust" to "Radio Ga Ga," Queen were the misfit band they proclaimed themselves to be in Bohemian Rhapsody. When they were on, they were the champions of the world. This adrenaline rush was just what I needed first thing in the morning. "Hot dog?" I say "Cool it, man." Let's just surrender to the many glories of Queen without question.

Bohemian Rhapsody should be the essence of Queen. We're not dealing with a hot-tempered soul innovator like James Brown or an insular, troubled pop genius like Brian Wilson. Queen were comparably modest even if they didn't sound like it. They would and did rock you, and their legacy presents an interesting dichotomy. Queen are the stadium band to end them all yet a campy pleasure who scored the 1980 Flash Gordon movie. Freddie Mercury is a homosexual icon and showman supreme, but was introverted and soulful enough to counter any stigma. Brian May, John Deacon and Roger Taylor (here played by Gwilym Lee, Joseph Mazzello and Ben Hardy, for the record) were all undeniably talented as songwriters and musicians. I wanted a whole movie to reinforce the very reaction I get upon hearing that compact version of "Radio Ga Ga" from their Wembley barnstormer, a moment to rival U2's equally compelling extended version of "Bad."

Alas, the widely-reported controversies behind the eight-year production and the simple appeal of Queen have clashed together to result in a film that is a rock biopic pile-up. It isn't exactly "Death on Two Legs," but better to serve it with the title "Hammer to Fall." Bohemian Rhapsody contrives a series of blunt melodramatic clichés which left me numbed by the time Live Aid is shoehorned into a third-act redemption arc. There I was turning as skeptical as Queen's past critics. This isn't merely a group of British pros putting on a great show for the ages in support of a worthy cause. It's a broken family coming together for the first time "in years." It's a wayward frontman learning humility, mending tattered relationships and coming to grips with AIDS. It's the most important charity guest appearance ever, with telethon lines ringing off the hook and funds raised into the stratosphere. It's no longer amusingly pompous but wretchedly hagiographic. 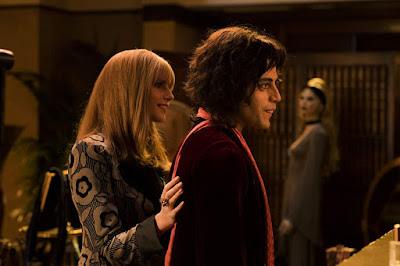 It didn't have to be like this. Spearheaded by Rami Malek's laudable approximation of Freddie Mercury's strutting, saucy charms, Bohemian Rhapsody is not lacking in charisma. Whether working up a paying crowd or a crowding player (look beyond the Gerry Rafferty makeup of one impresario for a flash, ah-ah, of stunt casting), Malek is dashing and daunting when duty calls. This is the first half of the movie, when the band is on the rise (there is a joyful depiction of their first studio sessions) and shacked up in a muddy, creaky country house to record A Night at the Opera. I could overlook the fact that during their preceding Sheer Heart Attack era, the movie version of Queen is blasting through "Fat Bottomed Girls," which wasn't released until 1978's Jazz (no "Stone Cold Crazy," which Metallica so awesomely covered, or "Brighton Rock?").

But then the movie progresses, fudging chronology and fabricating pitfalls with such superficial aggression that I was constantly demanding "Don't bore us, get to the chorus." It's London 1980, and Queen are now working on "We Will Rock You." Memo to screenwriter Anthony McCarten: "News of the World, motherfucker!" I would also assume the band members know the name of a certain single/live staple from that ‘77 album to be "Spread Your Wings." And why do we need hackneyed "Freddie goes solo" tension (which leads to the overstated Live Aid gig) when we could have Queen in 1977, taking one look at the punk landscape which was gobbing in their general direction and laying down the raucous "Sheer Heart Attack?"

Get On Up and Love & Mercy both had more respect for context than McCarten and directors Bryan Singer & Dexter Fletcher (not to mention consultants Brian May & Roger Taylor). They are like revelatory deep cuts next to Bohemian Rhapsody's exhausted hit parade. I came out of Get On Up genuinely sparked by the towering ambition of James Brown as well as the full extent of his brutishness, against bandmates, lovers and perfect strangers. Love & Mercy was rich with empathy for the frazzled soul of Brian Wilson, who heard searing symphonies and pained reveries in his head until he was drugged into possible oblivion. Everything about Freddie Mercury in Bohemian Rhapsody, especially his sexual orientation, is a hedged bet, a concession to formula which negates the declared intent of Queen's music.

Forgive me if I sound like I'm angling for a think piece, but the stodgy construction of this really does stink of the hetero-genous. I'm not asking to see what Sacha Baron Cohen or Stephen Frears originally had in mind. But as an adult, I would care for a depiction of Freddie Mercury that doesn't make his homosexuality look like a sheepish trip down the proverbial rabbit hole guided by a wasted Allen Leech as duplicitous manager Paul Prenter, tinted in infernal clubland reds and subject to migraine-inducing funhouse mirror-lenses when Mercury is grilled about his private life in a press conference. Never mind the way Mercury's real life soul mate Mary Austin (Lucy Boynton) and his bandmates are trotted out as reactionary figures, as well as the sexless bond he has with Jim Hutton (Aaron McCusker), another important friend of Freddie reduced to an agent of salvation. I think Freddie Mercury is more than worthy of wrenching pathos, an unfortunate casualty of a wasting disease which during the 1980s was seen largely as Biblical retribution by assorted religious fanatics and politicians. But damn are these filmmakers pushing for the retrograde; Bryan Singer showed more solidarity towards gays in his inaugural X-Men entries.

The performers are willing, but the flesh is decayed. Lucy Boynton, the love interest of John Carney's transcendent Sing Street, is as worthy of better material as Malek. Imagine a film which delved deeper into the intimacy between Freddie and Mary, the kind which inspired Freddie to treat her as his top confidante and inheritor in his will. Here, she is reduced to a fling, forcing Freddie into an emotional void he immediately fills with decadence and pageantry. All of the relationships, including the former Farrokh Bulsara's defiant connection to his Parsi parents (Ace Bhatti, Meneka Das), have this half-formed (or less) quality to them. Freddie was so much more larger-than-life in actuality, but you'll never know from the way the disco thump of "Another One Bites the Dust" juxtaposes a fateful walk through a leather bar. Didn't John Deacon write that song out of appreciation for Chic's "Good Times?" I heard no Nile Rodgers (Rick James, instead, another anachronistic credit to the film's millennial wankery), but I did get a "THIS IS DISCO!" fit to lead me into another false-improvisatory recording session. Did Steve Dahl ghostwrite this? 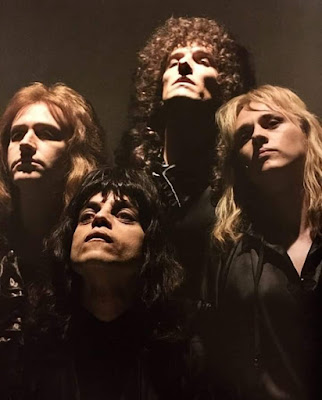 Let's be clear: Bohemian Rhapsody is geared towards the more middlebrow section of Queen's fandom, people who titter at a meta joke involving Wayne's World but do not feel a tinge of regret that director Penelope "The Decline of Western Civilization" Spheeris herself didn't contribute a eulogy which would've closed with greater power than the predictable trope we do get. Having mentioned Spheeris and Stephen (My Beautiful Laundrette, High Fidelity) Frears does no favors to Singer and Fletcher; with the latter connected to an Elton John biopic, whose teaser trailer graced Bohemian Rhapsody, look forward to more edgeless plug-and-play rock star dramatizations (please don‘t let me down, Lee Hall).

And Bohemian Rhapsody is strictly plug-and-play, to inexplicably reference "Weird Al" Yankovic (remember his "Bohemian Polka?"). Montages soak up whatever potential resonance there is to be gained from watching a baggage handler born in Zanzibar realize the highs and lows of stardom, and they just keep absorbing and absorbing until the film is as dry as the Atacama. Each musical moment proves an oasis, but they seem scattered because of the way Live Aid bookends the film. And these moments make up the bulk of the offending montages; every workhorse of a song is handled unimaginatively, their accompanying geneses too cute for their own good.

The more I think about it, the less I consider this even a "biopic," since it's too unreliable to have the quotes removed. What you ultimately get with Bohemian Rhapsody is a breakout performance from Rami (Mr. Robot) Malek that wants badly to be of Oscar caliber (Paul Dano and Chadwick Boseman, we hardly knew ye) and as disposable a reminder of Queen's popularity as Hollywood could muster. I don't anticipate what'll happen to, say, Judas Priest when the wind blows their way (save a prayer for Rob Halford). I should've cried those intended tears of joy as they wrapped up at Live Aid but wound up as sad as Garth Algar upon the immortal last words of "Bohemian Rhapsody" itself. Nothing really matters to me.*

*Except the songs, of course. But I can sing along with "Don't Stop Me Now" or "Play the Game" for free.