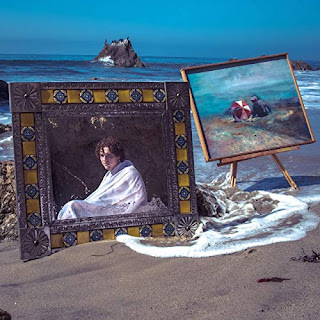 It's getting tougher to write these days, if I can continue to use my platform for honesty's sake. Something about that last review just feels too candid for me to even think about, and I can't pretend that what I said isn't still plaguing my psyche in the worst way. I didn't feel compelled to go back to my Amityville Murders review. This was the kind of piece so close to my heart, it came together more effortlessly than I could have hoped. I wrote in one sitting, because it was so direct to the core of what has become of me. And even though Diane Franklin herself as well as English critic Kevin Matthews have typed their support, I'm too confused to persevere. Did I withdraw in disgust or am I merely surrendering to apathy? When someone like Diane believes I have a novel in me, does that kind of faith have a long term effect? What am I even trying to accomplish now that I have let distance rule my heart?

There aren't that many celebratory options for me as I approach 36, so I elected to make one that will take me out of my comfort zone and maybe prove as rewarding as the piece I did on Olivia DeLaurentis' short films, which like that last article about her mother came out of confronting death. In the case of Olivia's tribute, my father was the departed as opposed to the more recent death of my grandmother. But it's more than just the passing of family now that is fogging up my creative inspiration. It's the losses of certainty, of connections and of conviction. I'm flying blind as I try to do something I haven't done since I published all my work on the former Epinions site: I am going to write an album review.

I am talking about the debut LP of Diane Franklin's youngest child, Nick DeLaurentis, the young Jesse Holiday from Devon Bight & the Sensitive Boys and composer of that film's mock teen pop. In fact, I am going to repost the link to Olivia's short film on Vimeo and ask that you watch that please before I make the transition.

My knowledge of Devon Bright is the sole piece of context I have in regards to Nick DeLaurentis, unless I must also credit him with the orchestral cover songs sprinkled throughout Royal Effups. A classically-trained teenage musician, Nick is currently pursuing his passion in Chicago, based on the interview conducted by Christian Thorsberg over at Navy Peer. His first two Spotify singles, “Knowhere” and “Beauty Mark,” showed his skill at acoustic guitar, and both songs carry over to Good Boy, his admittedly introspective solo debut. Boundless if not restless, Nick is already contemplating his follow-up as a truer extension of his taste, less informed by the indie folk scene like Good Boy is. My biggest takeaway listening to the album is that, as the title implies, Good Boy is a young man's fresh start, one which asks encouragement as he accrues further experience and curiosity.

For now, Nick is acting on the instincts of the moment, so I look to the opening track “Bone Dance,” also the source of his inaugural music video, for a proper introduction. Closer to Emma Bull than Miley Cyrus, the lyrics remind me of Gotye's “Eyes Wide Open,” which could be construed as a troubled relationship lament either interpersonal or ecological in scope. For his song, Gotye fashioned a bass part by sampling percussive rhythms off a musical fence in Winton, Australia, whereas Nick DeLaurentis is on the beach, specifically Montrose, the faint sound of bowed strings conjuring a colony of seagulls in the sky. Finger snaps provide a skeletal rhythm, with acoustic tolls and scrapes pulling the song further away from the DOR urgency Gotye favored, yet still attaining an irresistible groove. The overtracked chorus, delivered Monk style, comes across as jarring given the softness in Nick's verse vocals: “Everyone I know plays god games, but they don't even pray.” As rats threaten to breed in charm bags and the instruments drop out for an Imogen Heap-esque coda (“30 years away/No prayers left to pray/Singing Amen”), I hope I'm hearing this particular observation correctly for the sake of levity: “The things you left behind, you think I won't discover/I give you Olive Garden, but you just want the butter.”

The “Bone Dance” video shows Nick being tortured by mirrors, but on his first single release, “Knowhere,” he seemed preternaturally doubtful against a coffeehouse bossa nova backdrop. “I want you to be happy/I want you to be kind,” he sings on “Bone Dance,” a sliver of light through overcast clouds. But the tentative steps towards the outside world on “Knowhere” offer no relief when “we are still trapped in the fire,” with worldly knowledge proving insubstantial in the end. A corny opening couplet which rhymes “plane” with “train,” not to mention one of the clumsiest chorus lead-ins I can recall (“And you could be the president of Cuba/I'll bet you think you are important, too, yah”), prove more twee than such an existential joke can bear. At least the version of “Knowhere” on Good Boy ends less bleakly than before, mitigating the insular anxiety and promising some joy in life's journey.

Amidst the overtaxed empathy and sensory overload of “Chatter,” the album's peppiest track (with vocodized “blah blah blahs” for good measure), Nick gasps “I need peace!” but is generous enough to wish the same for his town and the planet in general. The hearth of family, luckily, helps Nick towards realizing it for a few lovely songs. The fondness of “Sweatshirt” could be dedicated to Diane DeLa...erm. Franklin, herself: “Some people play make believe/But I know it's all real after you leave/Your ghost by my side/Kissing me on the cheek.” On “Beauty Mark,” which opens once again with imagery of flames a la “Knowhere,” Nick sings “You twist my arm/I love you, anyways” in that rare “Just the Way You Are” ballad that references both the Phoenix and chocolate-covered marzipans in the same space. And Olivia DeLaurentis provides background vocals on the least foreboding love song in show, “Storage Space.”

“The Abstinence Dungeon” undercuts comically nervous portrayals of platonic affection with a blunt if faintly-sung “I would like to know how it feels to not be f***ing indecisive all the time,” and is way less insufferable for a Nice Guy anthem than “Treat You Better,” even without a lyric sheet (which I admittedly would appreciate: Nick sings like a young Steve Miller and gets overpowered easily in the mix). Nick's predilection for atmosphere resurfaces for the remaining songs, the title cut (which comes with an instrumental prelude and continues the beach ambiance from “Bone Dance” with Maui-style buoyancy) and the closing “Prelude to Dreams.” That last one seems sculpted from the indie folk cookie cutter, to be true, yet if Nick DeLaurentis chooses to embrace a fuller sound next time, this particular Good Boy will continue to listen patiently.

Posted by John Bishop at 6:02 PM No comments: