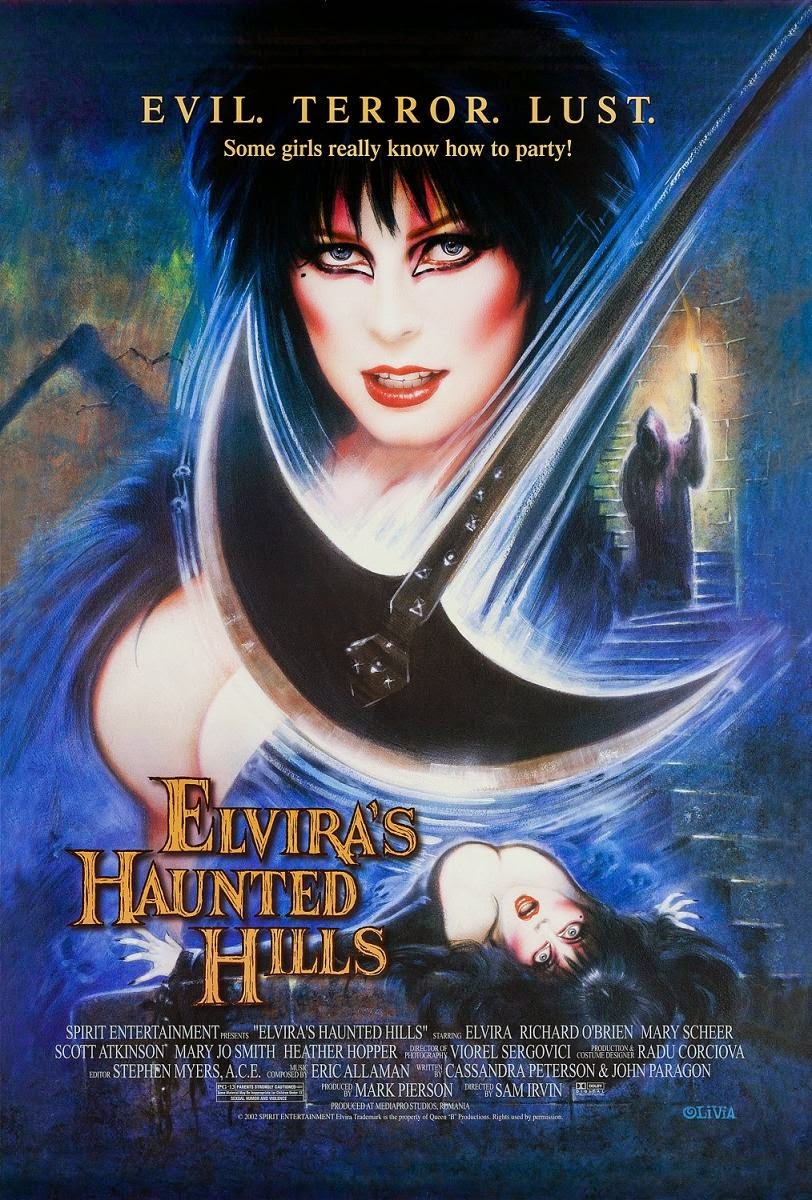 Late September back in 1988, Cassandra Peterson's buxom, beehive-wigged alter ego Elvira, Mistress of the Dark, finally saw her own feature film hit the big screen seven years after her fateful debut on Los Angeles' Channel 9 late night programming block. The sex symbol of All Hallow's Eve was poised to take over the world of cinema as part of her deathless merchandising empire, or at least would have if only distributor New World Pictures not went bankrupt immediately before its scheduled release. The feature-length spin-off went from wide release to showing in less than a one-fourth of the nation's movie theaters. Peterson, who had hustled and struggled to make the flick her way against the whims of the studio system, experienced what she referred to as "postpartum depression" in the aftermath.

Peterson celebrated the new millennium by shooting Elvira's second vehicle after more than a decade of false starts and corporate disinterest, but the game had changed drastically. Both she and her then-manager/husband Mark Pierson budgeted the film out of their own nest egg, mortgaging their home and borrowing money from Mark's parents. Shot on the cheap in Romania (read: real live Transylvania) for $1 million, Elvira's Haunted Hills was more stressful to film because it was so self-financed and equally taxing to market as the duo hit the festival circuit running. In the wake of that film's limited release, Pierson and Peterson filed for divorce.

Elvira's Haunted Hills, written once again by Peterson and her Groundlings mate John Paragon, places Elvira in another fish-out-of-water context, but this time inspired less by fundamentalist social mores and 1980s pop culture than by Peterson's B-horror fangirlism. In particular, Peterson and Paragon look back to the Roger Corman-produced gothic horrors which starred Vincent Price and were frequently based on the stories of Edgar Allan Poe. Imagine Elvira being a guest at The House of Usher, where her trademark saucy wit and silly egotism is anathema to the morbidity surrounding her. 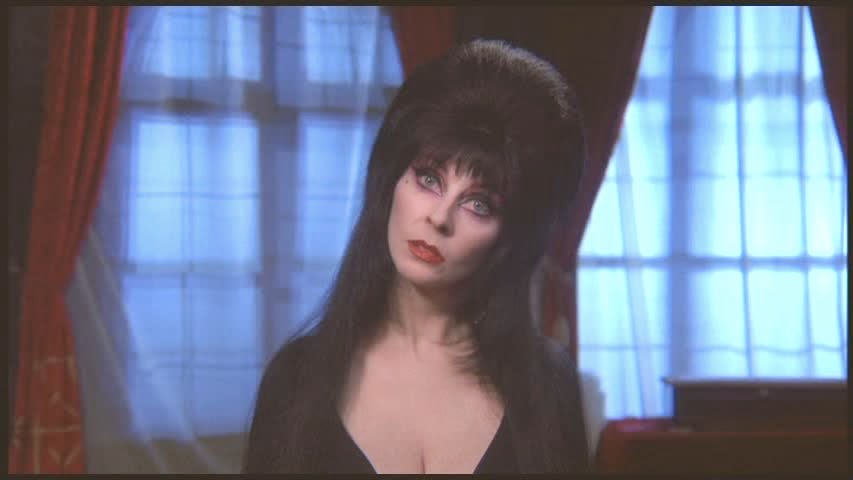 The obvious joke here, even more deliberate than in the earlier Elvira, Mistress of the Dark, is that no longer is Elvira merely hosting antiquated, cheesy "fright night" fodder, she's actually in the movie.

So when this film's Roderick Usher proxy, Lord Vladimir Hellsubus (Rocky Horror Show creator Richard O'Brien), flies off into a protracted grievance about the sanctity of the local cemetery being defiled by grave robbers, Elvira has to slap/snap him out of it, a la Cher from Moonstruck, and quip "What are you going for, an Oscar?"

Elvira retrieves Hellsubus' curved, Tomb of Ligeria-style sunglasses from the ground and is duly warned of his extra-sensory malady: "My eyes are tortured by all but the faintest of light." Her comeback: "Aah, so you've got a hangover, too, huh?"

This is the norm of the type of humor which Cassandra Peterson's Elvira has proliferated into profits, a high-spirited combo of Morticia Addams and Mae West with a wry voice equal parts Grande Dame and mallrat. On the surface, Elvira doesn't look any worse for wear in her trademark black dress emphasizing her long legs and outlandish cleavage, which naturally doubles as "her own airbags" in case of a coach crash.

Not a lot of set-up (or, for that matter, follow-through) to discuss, as the film opens in Carpathia, 1851, with Elvira and her French companion Zou Zou (Mary Jo Smith) making a doze-and-dash and escaping from an axe-wielding innkeeper (Theodor Danetti's Johan) in Benny Hill-style fast-motion. After roughing it on foot en route to Paris, where Elvira has an engagement performing her one-woman show "Yes I Can Can," a horse-drawn chariot comes to their aid as the passenger, Dr. Bradley Bradley (Scott Atkinson), offers them a room at Castle Hellsubus. 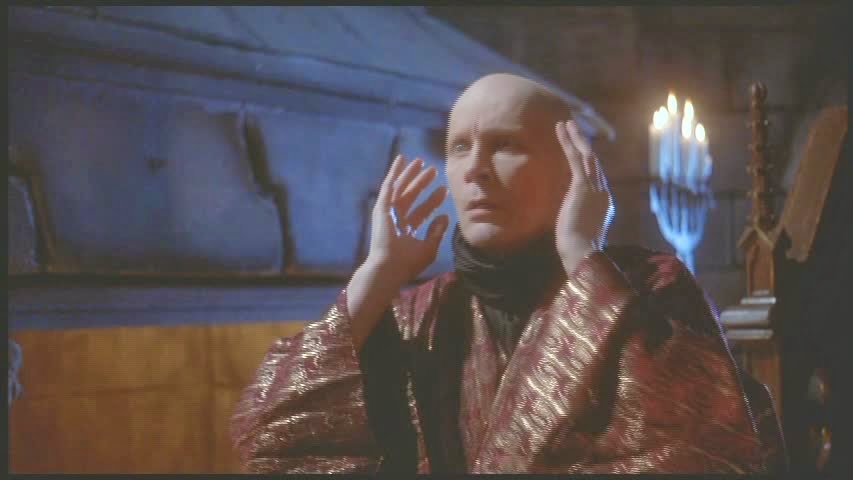 The Hellsubus clan is (super)naturally cursed, with Hellsubus eternally tormented by the suicide of his late wife Elura and his cataleptic niece Roxanna (Heather Hopper) coughing up a chunk of her lung on Elvira's "medicine chest." Dark family secrets involving torture, premature burial and adultery rear their ugly heads, but Elvira puts on her best "What, me worry?" face and flashes her rear at the end of a vampy musical number, "applause" emblazoned on her panties.

Meanwhile, there's a willing chunk of Eurotrash beefcake working out in the stable, named Adrian (Gabriel Andronache). In trying to high-tail it out of the dreaded castle, Elvira stops off to give him two goodbye presents, a copy of the Kama Sutra and a physical demonstration of its first chapter. All the while, non-English-speaking actor Andronache is dubbed in comically asinine fashion by veteran voice actor Rob Paulsen, prompting Elvira to break the fourth-wall during his introduction: "How does he do that? Weird!"

If you think I'm dishing too much of the jokes and japes in Elvira's Haunted Hills, then rest assured there is plenty of Vaudevillian slapstick and sarcasm which I haven't yet ruined, although the experienced viewer will feel constant déjà vu. It's certainly not a fresh film in terms of humor, even with the vast gulf between this and her 1988 outing, mostly because it's such a straight-up showcase for the Elvira character, who is less of a catalyst here and more of a verbal mood-shifter. Although the film positions her as Elura's spitting image/possible reincarnation and gives her a few eerie premonitions, the ever-so-brassy Elvira fails to revolutionize like before.

The period settings are handled with fidelity by director Sam Irvin, who gets in the kind of grainy exterior shots, foreboding interior creakiness and shoddy special effects which do right by the source material and give the film a sense of actually watching these old AIP-distributed Corman films proper. It's spoof as verisimilitude, and reinforces the overall good nature of this passion project.

The trouble with the film is that for as far as guileless camp goes, Elvira's Haunted Hills lacks the chutzpah of classic Mel Brooks or Zucker-Abrahams-Zucker style parodies. The whole project has the feel of if not lowered, then undemanding ambitions. There is a sincere thrill in seeing the likes of Ms. Peterson and Richard O'Brien hit their hammy marks with lightning force, but I never fully shook off the notion that this is processed comfort food on the order of Kraft Macaroni & Cheese. I would've loved a second helping of that divine mystery casserole, myself.