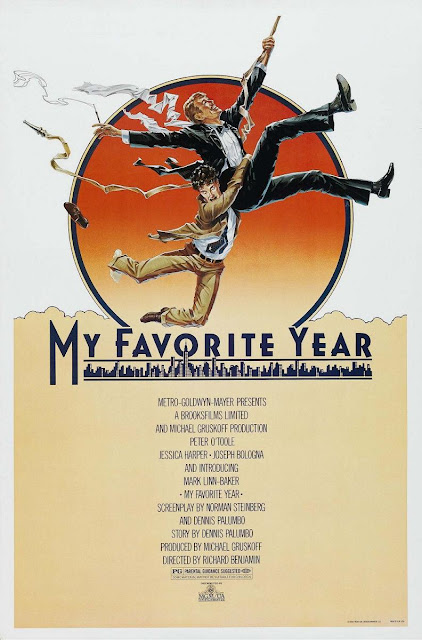 Alan Swann, the swashbuckling screen icon making a guest appearance on the Comedy Cavalcade, live on NBC every Saturday evening at 8:00, is a graceful disgrace. Having combated jet lag in his own debauched manner, Swann bursts into the writing staff's office as they screen the climactic duel from his signature vehicle, "Defender of the Crown." "Good God, it's Renfield!" Swann notices with sloshed alarm. "I thought he was dead." Reliving his victory from the movie superimposed over him, it's clear that the combating images don't match. One is at the height of his heroic glory, the other is relying on his rapier wit instead. The embarrassed head writer screams "[Swann's] plastered!" Swann counters: "So are some the finest erections in Europe." He fails the physical challenge part of his sobriety test just as regally. The only employee not prepared to dump Swann is his biggest fan, freshman writer Benjy Stone, and thus he lands the responsibility of being Swann's caretaker until show time.

Cementing the comeback he began with The Stunt Man, Peter O'Toole received a well-deserved seventh Oscar nomination as Swann in My Favorite Year, the third of the '50s-themed comedies I've covered on this blog. Whereas Diner was the most poignant and Porky's paraded the lowbrow populism, Richard Benjamin's debut has the highest ratio of side-splitting comedic performances and set pieces among these period capers. Much like fellow actor-turned-director Rob Reiner, Benjamin takes this opportunity behind the camera to truly showcase those he places in front. So alongside O'Toole as the lanky British legend, Benjamin corralled another promising newcomer in the lead role of Benjy and surrounds both Mark Linn-Baker and Peter O'Toole with a slew of top-notch cut-ups. 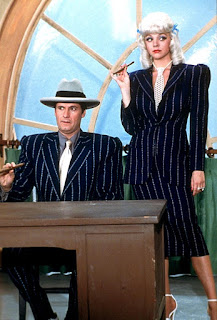 Linn-Baker (Noises Off, Perfect Strangers) as Benjy Stone (re-)acquaints us to the world of 1954, but more importantly mediates the warring egos to whom he's subservient. There's enough hustle and bustle where he works to make up for the Manhattan traffic. Chief writer Sy Benson (Bill Macy) tells Benjy his sketches are awful when he's not deriding Swann's oeuvre as "crap." Lording over both Benjy and Sy is the host of the Comedy Cavalcade, himself, Stan "King" Kaiser (Joseph Bologna), and he's not particularly fond of Sy's contributions. Despite his show business milieu, Kaiser's personality isn't too far removed from his recurring character of mobster Boss Hijack. When he goes too far in belittling his staff, Kaiser slips his assistant producer K.C. Downing (Jessica Harper) some greenbacks for a set of whitewall tires or a pair of used, ill-fitting shoes as compensation. Kaiser is such a seasoned wise guy on the set that he's well-prepared to insult the object of Hijack's weekly ridicule, labor leader Karl "Boss" Rojeck (Cameron Mitchell), in person.

King Kaiser's mocking refusal to cater to Rojeck's cease-and-desist brings its own bad juju outside of Alan Swann's reckless behavior. That Swann manages not to make a scene at the Stork Club once again ("It's been a year and a half. Surely, they've repaired the wall of the bandstand by now") is immediately undone by the lascivious spree immortalized on the next morning's front page. Even after Benjy treats Swann to dinner with his Jewish family (and prizefighting Filipino stepfather), the night ends with a fruitless scheme to generate passion between Benjy and K.C. (it's the rooftop scene from Die Hard predated as old-timey comic catastrophe). As they walk home, the two solidify their mutual bond by relating the identities they sacrificed in the name of entertainment. It would be valiant for Swann to try and reconcile his deepest shame(s) on any other day but Saturday, as he's leaving Benjy and the show hanging by the frailest thread. Can Swann (and Kaiser) pull it together or will 1954 be the year they pioneered the rerun? 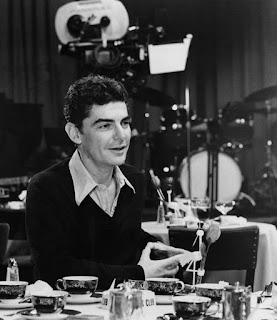 Richard Benjamin, who won a Golden Globe as supporting actor in The Sunshine Boys and kept a solid profile in the 1970s in movies such as Catch-22, Westworld and Portnoy's Complaint, made an incredible transition in 1982. He went from playing the father in the unheralded horror-comedy Saturday the 14th to captaining what Premiere placed as #37 in their 2006 list of the 50 Greatest Comedies of All-Time, the only film released in 1982 to do so (Tootsie, Diner and Fast Times at Ridgemont High all made the AFI survey denied Benjamin). Not only that, My Favorite Year was ranked above This Is Spinal Tap and A Fish Called Wanda in Premiere's article.

Though it avoided the fallacy of heightened expectations since I watched it without context, My Favorite Year does not unseat either Spinal Tap or Wanda in my opinion. It's too wistfully old-fashioned to compete with the fresher material Reiner and Crichton realized so uproariously. But in an era where Bringing Up Baby could be plagiarized to suit a faulty pop icon or a Parker Brothers board game begat a low-hanging Murder by Death, My Favorite Year is effortlessly snappy and quite intelligent in its many varieties of humor. Benji's self-deprecating if steely persistence in winning a date with K.C. ("Sanctuary, my ass!") drives him to propose a live-in relationship in the ladies' room; when Swann follows unawares, wardrobe lady Lil (Selma Diamond) gets more than she bargained for in her objection to the aging cad. There is a framed photo of Kaiser with darts embedded it in, something his writers scramble to hide when he appears for a conference call.

Writers Dennis Palumbo and Norman Steinberg have worked, respectively, in network television (Welcome Back, Kotter) and gag-oriented comedies (Blazing Saddles) prior to this. They manage to take real life personas (Errol Flynn, Sid Caesar, Neil Simon, even their producer Mel Brooks) from the Your Show of Shows era and boil them down to their most humorous essentials. Benjy Stone is a quick-witted egghead who sees the world divided between those who are funny and those who aren't, but without the neurotic irritability of his more forceful supervisors. He does convince K.C. to join him for dinner and a movie within their 30 Rockefeller Plaza work space, and even though the dame bungles one of the easiest jokes in the world, K.C. garners a worthy laugh after they lock lips. Given his comfortably broad delivery, Mark Linn-Baker comes off like a younger, gentler Albert Brooks, especially when he says to Swann at one point, "There's the door! Come on, let's go give it a try!" 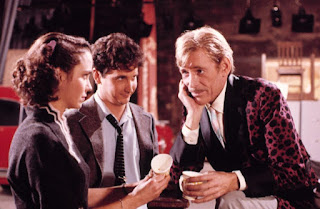 Peter O'Toole impresses across the board as the boozy, flirtatious Alan Swann. Having been reclassified as freight on the plane ride to New York City, Swann is dragged atop the luggage performing a spirited rendition of the "1812 Overture." Tied up in the latrine ("Go ahead and lash me, you swine! You'll not loosen my tongue!"), his clothes are all tear-away so as to best prepare him for a sobering bath. Having been restored to his senses, Swann's infamous return to the Stork Club delivers the playfully debonair and sometimes rueful veteran Benjy is happy to call his personal hero. Swann is wise enough to know he is still living off the perks of stardom, but with an estranged daughter in Connecticut and deep-seated doubts about his own talent, Swann's dashing, drunken allure is worthy of resuscitation. O'Toole is Dudley Moore and Sir John Gielgud rolled into one, melding stringy physical comedy and urbane one-liners with infectious freedom.

King Kaiser is a slave to his own pampered arrogance, and Joseph Bologna (R.I.P.) puts his own hilariously forceful spin on the archetype. The offhand ways in which he makes fun of Boss Rojeck during their sole confrontation, parroting his threatening manner with a cigar as well as reciprocating Roejck's remark about being in the "removal business," establish Kaiser as a worthy comedian since there are only a couple moments of his show in rehearsal. By humiliating Rojeck, Kaiser sets off a series of mishaps, from waylaid sets to falling spotlights, which render him a nervous wreck moments before the show is called to action. 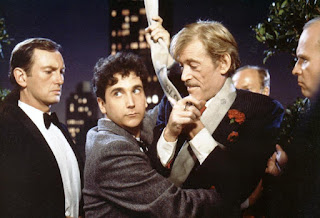 Benajmin's skill with these three actors extends to the supporting cast, too. Jessica Harper (Suspiria, Pennies from Heaven) is given the most constraining role by contrast with her predominantly witty peers, but the aforementioned indoor date she has with Mark Linn-Baker warms her up considerably. Sadly, Harper's charms aren't elaborated further in the script. Given more time to make fine impressions are the team of Anne De Salvo (Arthur) and Basil Hoffman (Ordinary People) as underling writers Alice and Herb, the latter a silent clown who whispers his bon mots into the ear of the former; Adolph "Moses Supposes His Toeses Are Roses" Green as producer Leo Silver, whose full head of gray hair is the result of handling the temperamental Kaiser; Tony DiBenedetto (Prince of the City) as "Signor" Alfie Bumbacelli, Swann's loyal chauffeur; and the invaluable Lainie Kazan as Belle May Steinberg Carroca, Benjy's perfectly embarrassing Jewish mother out in Brooklyn. Ramon Sison is splendid as Rookie, the domesticated ex-boxer Belle married, now packing his punches within the recipe of his Meatloaf Mindinao.

(Other familiar faces to watch out for include Lou Jacobi as Uncle Morty, George Wyner as Boss Rojeck's lawyer Myron Fein, Titanic's Gloria Stuart having a dance with Peter O'Toole, Repo Man's lobotomized scientist Fox Harris, and Corrine Bohrer of Vice Versa as a stewardess Swann romances early on.) 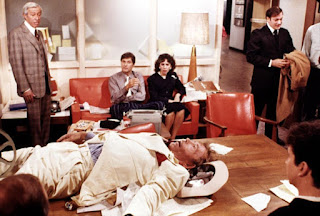 Rather than conjure Rob Reiner or Robert Altman, My Favorite Year is the kind of movie I wanted Soapdish or For Your Consideration to measure up to (a wortheir heir, unsurprisingly, is NBC-TV's own 30 Rock). Sophisticated in its structure and not without ample heart or humor, this is more a tribute to the jubilant anarchy which goes into developing live comedic television than 1954 in particular. The focus is as sharp as the ensemble who makes these flustered go-getters look genuine. My Favorite Year did not rake in the boffo gross upon its release nor has it gone viral in the modern world 25 years since then. But what Richard Benjamin did achieve is storied in its own right: a finely-crafted showbiz farce with one of the single funniest performances of the 1980s from the eternal Lawrence of Arabia.