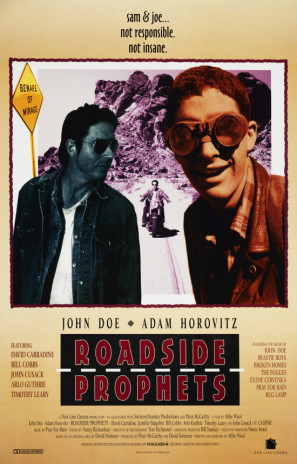 Stranded at the intersection of Easy Rider and Repo Man is where you'll find Roadside Prophets, a cross-generational shaggy dog story which fires all of its guns at once yet never explodes into space.

Abbe Wool, co-writer of Alex Cox's sophomore gem Sid & Nancy, makes her feature debut here and is clearly bucking for a quirky social satire on the level of Cox's earlier film, which was simultaneously one of the funniest and most far-out movies of its decade. She doesn't quite reproduce Cox's outsider wit and cohesion, leaving Roadside Prophets to eat the dust of that intergalactic '64 Chevy Malibu.

Compared to the last tragically hip indie project on my reviewing log, Inside Monkey Zetterland, Wool's film is not without some welcome detours.

First and foremost is the casting of John Doe and Adam Horovitz, respectively of X and the Beastie Boys. As a devout fan of both acts, these punk rock icons carry their personalities from the stage to screen with integrity. Doe seems to be inhabiting the working class zero he once drawled about in "The Have Nots," the closing track from his flagship band's 1982 album Under the Big Black Sun. Meanwhile, the ever-adenoidal Horovitz is playing the fool in a broad reprisal of the troubled teen role with which he made his acting debut in 1989's Lost Angels. 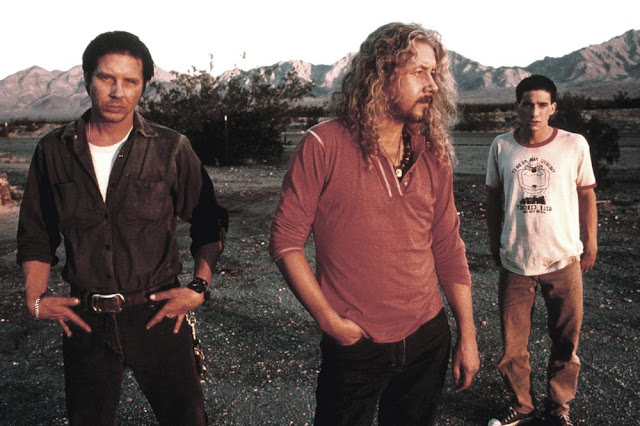 Doe is literally an average Joe, as in Joe Mosely, whose Harley chopper is the only thing that gets him through life as a factory employee still paying thousands in alimony. Joe's used to the routine of cold coffee and hazardous conditions after six years of slaving, but has mercy on first-day coworker Dave Coleman (David Anthony Marshall). The two immediate friends ride out to a strip joint for refreshment, but Dave is distracted by an arcade machine which just as promptly ends their union.

Joe takes it upon himself to have the deceased Dave cremated and embark on a pilgrimage to what he misconstrues as the Nevada town of El Dorado, home of Dave's favorite casino. With the help of a faceless personnel clerk, Angie, who pesters him for a date in exchange for covering up his absence from work, Joe hits the road but keeps running afoul of a reckless boy who walks across rooftops with Roman candles in his hands, trailing Joe every mile of the journey.

The kid is Sam (Horovitz), an orphan on a mission of his own which involves lodging only at Motel 9 rest stops, ostensibly as a company inspector. Joe reluctantly accepts Sam's shadowy companionship after the youth buys a vintage Triumph Bonneville. En route to El Dorado, the duo meet a host of aged counterculture oddballs, from a farmer who philosophizes about "transcendent reality" (Timothy Leary) to a dine-and-dash bandit who claims to be "Symbionese" (John Cusack) to a hookah-smoking hermit interested in martyred Roman gladiators who were actually "Utopian saints" (David Carradine).

These assorted outsiders seem to be byproducts of halcyon revolutions, what with the stunt-casting of people like Dr. Leary and Mr. Guthrie as well as Abbe Wool's penchant for ribbing the slogans and scenes they stand for. John Cusack's character, Caspar, is introduced in a '50s-themed greasy spoon which the green-eared Sam takes at face value as an incredible simulation instead of the tacky nostalgia totem it is. Caspar winks through his eye patch when he announces his nationality and, after pigging out on a 12-course meal, he bolts for the exit screaming "Free food for the poor!"

Those who loudly and proudly announce that they stand for something, man, turn out to be some degree of overbearing eccentric, whether it be the isolated, interracial radical couple (Bill Cobbs as Oscar, Lin Shaye as Celeste) with an incorrigible sense of gallows humor over their wasting away from cancer and AIDS or the authority figures (Barton Heyman as a sheriff, Stephen Tobolowsky as a park ranger) who are laughably hyper-responsible. Meanwhile, the middle-aged Don Quixote and the adolescent Sancho Panza roam towards their uncertain destination, and if they don't quite make it as father/son surrogates, at least they'll be drinking buddies by the time they get to Ely.

Wool's film falters often as a comedy, particularly in handling the dim-witted apathy of Sam, whose knowledge of past presidents is gained from magazine covers but whose frequent dismissal of the rogues gallery as "insane" seems too weak to be humorous. It's tough to also forgive the repetitive nature of the episodic script, even though allowances must be made given its road-bound genre. The supporting characters keep piling up to the degree where you wish Ms. Wool would've allotted Joe and Sam some time to stop and smell the cactus flowers.

Such a reprieve would be welcome because, unlike Inside Monkey Zetterland or (even worse) Wild Hogs, Abbe Wool doesn't fixate on her navel or go for the low in comedy. This is essentially a playful, humanistic reversal of Easy Rider that has a Zen-like core. Though she sets up expectations to knock them down (turns out Dave may have been chemically-impaired about the whole "getting lucky" endorsement), Wool's smart enough to make a ruggedly handsome straight man of John Doe (previously seen in Road House and Great Balls of Fire); the X-man can fire off a laconic quip to rival Hugh Jackman. And if you're in the right mood and can sense the self-deprecation behind the King Ad-Rock's bravado (he can do the Jerry Lewis, after all), Mr. Horovitz is appealing company, too.

Jennifer Balgobin, who played the petty thief/lover Debbi in Repo Man, makes a welcome reappearance alongside such fellow Cox repertoire players as Biff Yeager (the barkeep at Shipwreck Joey's), Patti Tippo (as the casino cashier) and Dick Rude (Duke from Repo Man, here playing in a lounge act alongside Manny Chevrolet and Flea).

As for the cameo appearances, a glowering David Carradine makes the richest impression as a forest friar. It's no surprise to see John Cusack in these surroundings, as it's his propensity to juggle loony character work with more accessible projects (Tapeheads preceded his career-defining role in Say Anything), and he's the most live-wire of the kooky cast. But the walk-ons from Timothy Leary and Arlo Guthrie are over before you register them, thus less successfully handled.

Wool plants better existential jokes in the margins of scenes, like a droll newscast on a militant mailman who letter bombs Planned Parenthood clients ("Long live the unborn!") or a ghostly golf gang consisting of accident-prone leathernecks, that bolster the movie's basic philosophy of freewheeling tolerance. John Doe wails it himself in the opening credits number, "Beer, Gas, Ride Forever": "Why can't people get together?"

(Other artists on the soundtrack are, naturally, Doe's X-wife Exene Cervenka and The Beastie Boys. Also included are The Pogues and Pray For Rain, who both contributed to the score for Sid & Nancy, as well a couple other Repo Man vets).

Another asset of Wool's is DP Tom Richmond, who does for the expansive Southwest deserts and city streets what he did for the snowy war fields in A Midnight Clear. The movie may or may not be serious in reviving the spirit of '69, but Richmond's lens captures a mythos of its own.

This makes it all the smoother for Roadside Prophets to be admired as a character-friendly dramedy that, despite its allegorical anemia, is mildly entertaining for another "life's a journey" morality fable.