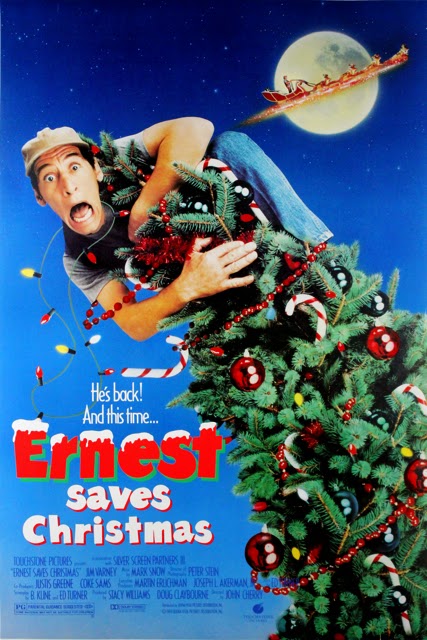 Ernest Saves Christmas is a film title of holly jolly irony. Even with all of the goodwill in the world, as befitting a simpleton who is "at one with the Yuletide, kno-wut-I-mean," it seems that throughout this second vehicle for the late Jim Varney's hayseed man-child, Christmas needs to be saved from Ernest. In rescuing a pine tree from the back of a truck, he causes a multiple-car collision. Taking the reins of Santa's reindeer-guided cart, Ernest is given the Jack Skellington treatment by Air Traffic Control. And his perennially overwhelmed neighbor Vern, seen as always through the camera eye, has his living room demolished by Ernest's mercenary party-planning. You feel like hiring Pee-Wee Herman for damage control.

In 1987, Ernest Goes to Camp was the first major spin-off for Varney's persona of Ernest P. Worrell, the rambling yokel who spent the better part of a decade filming one-take commercials out of Nashville for companies both regional and national, although primarily the former. Under the Disney Studio subsidiary Touchstone Pictures, the Ernest brand stretched out to four theatrical releases, the fifth being 1993's independently-released flop Ernest Rides Again. From thereon out, it was DTV all the way, with Disney's only affiliation being Slam Dunk Ernest (1995), co-starring Kareem Abdul-Jabbar during the short-lived craze for casting NBA heavyweights in family movies (Kazaam, Space Jam).

Varney found greater success in Disney's own Toy Story films as the voice of Slinky Dog, and was duly cast as Jed Clampett in Penelope Spheeris' early 1990s feature revival of The Beverly Hillbillies. Alas, Varney passed away from lung cancer in 2000 and never made it back on the marquee biz. But according to both Varney and directing partner John Cherry, Ernest Saves Christmas has held up as their favorite of the series, no doubt because of it being the most, well, earnest.

A lot of the film's benevolent gravity, however, is in the casting of stately Douglas Seale as the Santa Claus of this story. The twist herein, which surely lent itself to a future hot Dis-cember property, is that Santa's mythology and magic must be properly transferred to a willing mortal man. Like many an aging detective in a gritty cop thriller, even Santa gets too old for this stuff, although no policeman ever had to work the beat for almost an entire century.

Seale's Santa arrives in Orlando, where a businessman engages him in idle chatter, or mingle with the Kringle. Of course, the clues soar over him like a sleigh, whereas even the most jet-lagged tot is keen to the presence of their holiday hero. Santy Claus is away on business, though, and that is to christen children's entertainer Joe Caruthers (Oliver Clark) as his descendant. To get to him, Santa will have to hail a taxi and thus enters Ernest P. Worrell himself into the plot, having dropped off a catatonic passenger at the luggage conveyor belt. 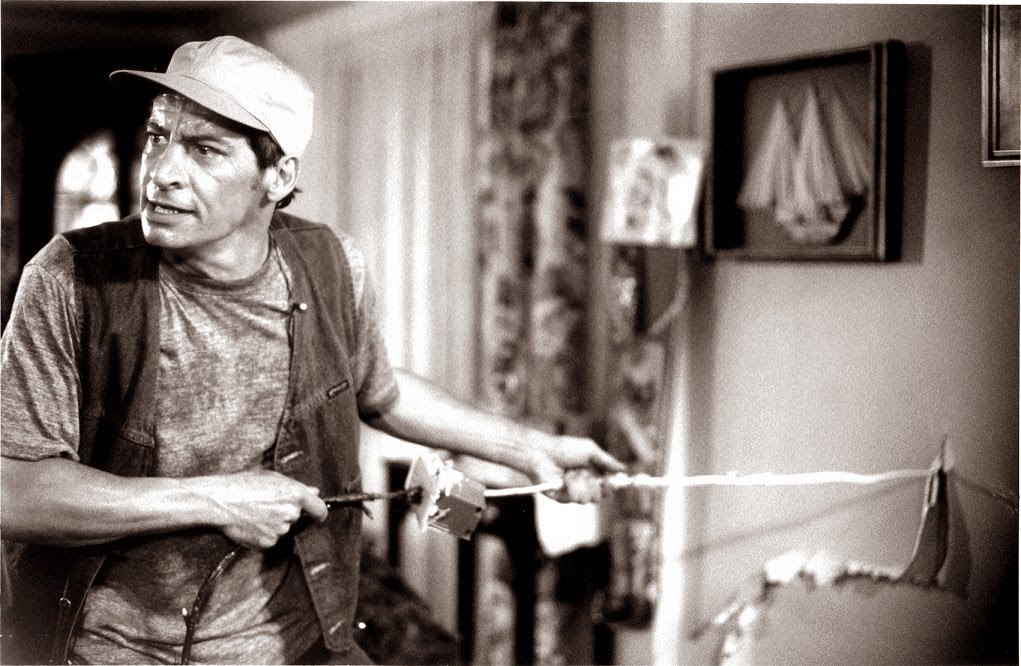 En route to their destination, Ernest picks up the 1980s equivalent of a Dickensian street urchin, a teenage runaway nicknamed Harmony Starr (Noelle Parker) who takes in stride both the bad John Wayne impersonator behind the wheel and the genuine St. Nick riding shotgun. It doesn't end well for either men when Ernest is fired for giving Santa a free ride and Santa is diverted from his conversation with Joe by hotshot agent Marty Brock (Robert Lesser), who is grooming the unemployed Uncle Joey for the lead role in a movie and has his competitor, "Mr. Santos," arrested for vagrancy.

Ernest accidentally forgets to unload Santa's magic bag of toys, thus becoming enough of a believer to take Harmony along on a mission to rescue the imprisoned St. Nick before Christmas Eve, 7 p.m. But the complications snowball when Harmony keeps the sack for herself, Joe remains skeptical about his great promotion and a pair of helper elves arrive to gather up the reindeer only to end up chauffeured by the hapless Ernest, who commandeers the sleigh literally around the world and back.

Jim Varney, by all accounts, got taken at face value a lot by fans of the doltish Ernest character, when he was actually a very learned, gentle man away from his alter ego. There are intimations that Ernest himself is working on an intellectual level more cunning than his slapstick stupidity implies, especially when he disguises himself as a double-talking governor's aide or a mangy snake wrangler. Add this to his guileless warmth and self-confident malapropism, and it's clear that Ernest P. Worrell is deserving of his cult status and position in a Christmas fable.

It's just that Ernest Saves Christmas pitches itself so firmly in the middle ground, punching its weight with corny bathos and overeager farce. Ernest is such a live-action cartoon, with his elastic mandible and wide-eyed "Aw, shucks!" demeanor, that he thrusts himself into an alternate dimension that no one can keep up with, not even reliable supporting players Gailard Sartain & Bill Byrge doing their own bickering, rattled comic shtick as the weary warehouse watchers. Jerry Lewis and Jim Carrey each understood when to let their guard down even in the wildest abandon, whereas there isn't a barn door broad enough comparable to Varney's mugging.

The rampant sentimentality is just as wearying, with Harmony set up as such a sarcastic, selfish anti-foil that her dramatic turnaround could immediately prompt the kind of exaggerated eye-rolling Sartain is called upon for. Ditto Joe Carruthers' arc, where the good-mannered and genteel TV personality is shooed into a schlock horror film incorrectly referred to as "Christmas Sleigh." Although its childish wonder and innocence is a very noble ingredient to preserving the benevolence of the Christmas season, you can imagine less dancing sugarplums and more Ernest decking the hells with a sledgehammer way too easily.

Thank goodness Douglas Seale makes the best of his role, clearly demonstrating the right attitude akin to original Miracle on 34th Street actor Edmund Gwenn in his appealing characterization of Santa Claus. A lot of the comic moments involving Seale hint at a cleverness the rampant product tie-ins undermine, with particular bits involving a customs check-in and his carousing his cellmates into caroling seeming rictus-proof.

And yet what to make of a fleeting glance at a "Keep Christ in Christmas" dashboard sticker in Ernest's cab which is of less significance than the triangular advert for Bic's Metal Point Roller pens atop it? It kind of defeats the purity of your modest Christmas comedy to remind viewers of Ernest's commerce-minded origins, as if to give viewers the impression that Santa's jelly belly is actually beer gut resulting from too many bottles of Bud Light (although the Coke ad credits suggest otherwise). 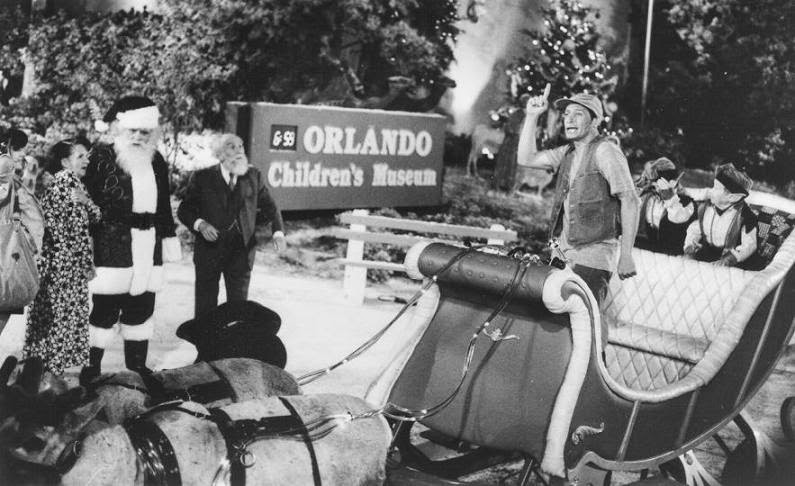 Ernest Saves Christmas isn't the lumpen coal many have made it out to be since its release, but it rarely shines in the way you'd hope. There is as much goodwill as there is ineptness, as this is the kind of movie where Jim Varney desperately loops random one-liners over non-existent lip movements for that extra pinch of annoyance. And even though comedy is notoriously subjective no matter what the demographic, whether they involve sex, splatter or satire, Ernest P. Worrell still comes across as polarizing despite the valiant Varney. If both the actor and alter ego aren't as dumb as they look, though, then maybe Ernest Saves Christmas is pleasantly aware of its single best joke. It's a shame the rest of this caper wasn't let in on it.