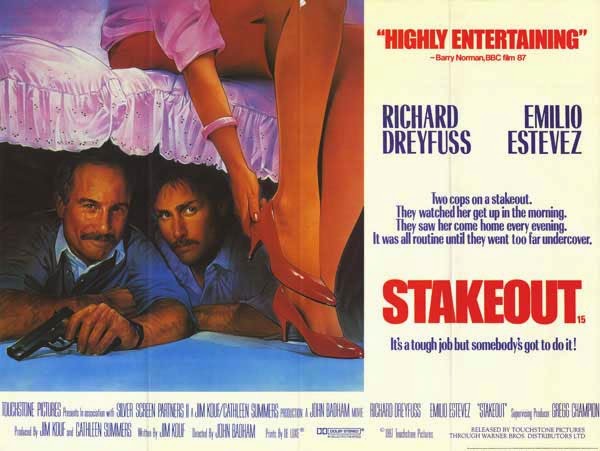 I must have been nice this year, because St. Netflix has deemed fit to send me another John Badham-directed cop comedy from my DVD queue so shortly after the last. God bless us, everyone!

So in 1986, the Englishman who once directed WarGames and Blue Thunder decided to shake things up by delving into lighthearted family fare with Short Circuit. Badham was known as a dramatist ever since Saturday Night Fever was a disco-era smash, but the success of that cuddly robot caper seemed to give him the freedom to work a clearer comedic angle into his films. The result was Stakeout, a late-summer farce which was less Lethal Weapon and more "Pop Gun Blues."

Put it this way: one film had Mel Gibson pressing a single-shot Beretta to his head (and over the holidays, natch), desperate to end his mad dog existentialism; and the other has Emilio Estevez throwing a stray cat in the car of his blustery rivals (Forest Whitaker & Dan Lauria, marginally magnificent), thus chasing off a pet bulldog, as a prank.

There is still plenty of lonesome angst to contend with in Stakeout, although here it belongs to Richard Dreyfuss as feisty Seattle detective Chris Lecce, who is frazzled but far from Martin Riggs' suicidal mania. Badham previously worked with Dreyfuss during the actor's cocaine-addled downward slope on the euthanasia tract Whose Life Is It Anyway? (1981). Stakeout helped to renew Dreyfuss' post-sobriety popularity by becoming the eighth biggest blockbuster of 1987, even edging out Lethal Weapon by a couple grand.

Scripted by Jim Kouf, who also wrote same year's disreputably grand The Hidden under his nom de pulp "Bob Hunt," Stakeout blesses Dreyfuss with a whale of a role, or at least one which serves his fast-talking, quick-thinking reflexes very well. It also requires him to get dirty with fish residue and sawdust in contrasting chase sequences, as well as play off Emilio Estevez as stern sidekick Bill Reimers, who resembles one of the comically mustachioed Beastie Boys from their mid-1990s "Sabotage" video.

The human condition to Det. Chris Lecce is that he's frequently restless, highly combative and newly single after his beloved Bonnie leaves him with little but the bed he loses sleep on, having taken the shades with her. He's such the model of mid-life misery that when he's ordered to pull the night shift in surveying the ex-girlfriend of a fugitive, he has no choice but to get closer to his subject than he or his partner hoped for. 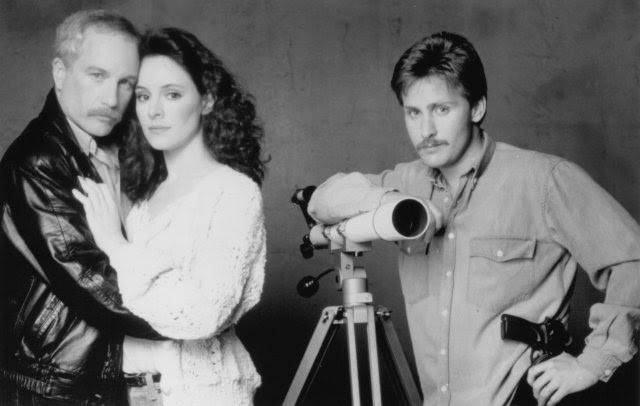 The woman is Maria McGuire (Madeleine Stowe), a lithe Irish-Mexican bombshell whom the policeman peepers duly admire from across the street in their grimy headquarters. Chris bugs her phones by masquerading as a repairman, but fatefully approaches her at the supermarket away from Bill's own watchful eye. It isn't long before the two become romantically entangled, a dalliance which not only throws a wrench into his assignment but may as well put him over his head with Maria's cop-killing squeeze, Richard "Stick" Montgomery (Aidan Quinn), who is coming to collect a hefty sum of cash stashed away at her digs.

When I wrote about Badham's The Hard Way, which preceded the proper sequel to Stakeout by two years, I was quite impressed by James Woods and Michael J. Fox creating such a rambunctious rapport given their tightly-focused characterizations. Revisiting Stakeout, though, I have to admit that though I found Fox more humorously adept than Estevez, Richard Dreyfuss is better than even Jimmy Woods. It's enough to make me mildly embarrassed.

"I don't think I realized until just now the size of the hole I dug for myself," Chris reluctantly confesses at one point in embrace with Maria, and Dreyfuss is in top form getting us to squirm as much as he does at his own randy deception. Coincidence dictates that Maria will encounter Chris at his "office" when he pulls strings to get her free good-hearted brother on work release. Dreyfuss gives it his all, darting his blue eyes from behind his cap, stammering himself silly upon their encounter and finally retreating with tractor beam humiliation.

Not that being at a distance keeps Chris from finding fresh ways to make a fool of himself. After doing Maria said favor at the precinct, he phones her up in solitude as he spies on her in the kitchen, struggling to remember his flimsy alibi and damn near blowing his cover when he sees her skillet catch fire. All the while, Chris tries to assert himself as a loverman beyond his perceived Mr. Nice Guy timidity. He sees it as a stigma, "like medium," and gets a whole new identity to fabricate in his final confrontation with Stick.

Richard Dreyfuss is a joy to watch at his most nervous and such an intuitive actor that he overcomes the dubiousness of playing a mensch with a badge. By contrast, Emilio Estevez can't help but seem hopelessly green having to essay Dreyfuss' opposite number. I can't be unfair to the former Repo Man, ultimately, as he navigates sublimely between the puckish and the parental, establishing a more well-adjusted presence than his earlier roles suggested (no stalking in the rain a la St. Elmo's Fire).

The casual nature of their performances also accounts for why they work well together in the movie. The scene where the duo pass the time with trivia games, with Chris having to guess movie quotes and Bill the history of American ex-presidents (with a Playboy centerfold used as a hint for one of them), is a good barometer of their chemistry. It's also a shrewd joke at the 40-year-old Dreyfuss' expense. Nowadays, male-oriented comedies have pushed the "bromance" angle as far as they can go, so there's something retro-actively innocuous about the bickering between Dreyfuss and Estevez, which is more Homer and Marge Simpson than anything in buddy cop history. But they never compromise their integrity, and this combined with their priceless jesting ("So, did we practice safe sex?") gives me a better understanding of this film's amiable popularity than, say, Wild Hogs.

Still, the threat remains of Stick's encroaching reunion with Maria, as the felon and his cousin drive towards Seattle in bullet-riddled conflict with the law. The Hard Way lacked for an interesting villain in the admittedly goofy Party Crasher, whereas the dryly charismatic Aidan Quinn shows a more volatile, unique menace. Relishing his freedom with childish disbelief and a wicked grin, Stick is also sufficiently brutal in his big getaway and intriguingly petty in the realms of both crime and love. His psychotic jealousy lingers in Bill's mind, even though he cannot help falling in love with Maria and risking the suspicion of his superiors. 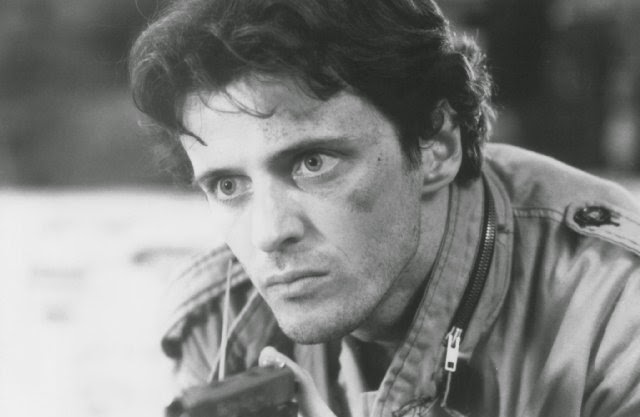 John Badham incorporates thriller and action elements rather programmatically, and, like The Hard Way after it, there is a slight feeling of tonal dissonance when things kick into gear. But he at least understands that they are obstacles in service of a smarter perception of lovesick foibles. Madeleine Stowe rises above what could have been purely an objectifying archetype to give Maria homely pluck and perception, her intimate moments with Dreyfuss utterly engaging. Jim Kouf's screenplay is actually quite generous in giving its principal characters equal integrity and workaday empathy, using shorthand and shared understanding in just the right ways to make mundane "shit detail" surveillance jobs as well as impromptu dinners register with warmth.

Stakeout is one of the more humble films to have ever eclipsed the $100 million mark at the box office, even with its studio pedigree and star actors. When Another Stakeout reunited all of its key players in 1993, it felt not only arbitrary but past its time. The Hard Way underachieved theatrically, Lethal Weapon already spun out two increasingly profitable sequels and Estevez got involved in the National Lampoon spoof Loaded Weapon 1. The buddy cop formula got lost in the adrenaline-fueled mid-1990s until Rush Hour arrived, with the only real quirk coming from the science fiction-oriented Men in Black. Not to say Stakeout is trend-setting, since 48 Hours from 1982 remains the catalyst for all that would come, including this, Lethal Weapon, The Hidden, Midnight Run, Downtown, etc. etc.

It does hold up despite its reputation as disposable cable fodder, though, especially with the mature love affair at its spine and the revitalizing performance by Richard Dreyfuss. Not too many of those aforementioned films were eager to defuse their machismo with the mundane devotion to romance and procedure Stakeout provides, so it does stand out in a positive way. That it thinks forwardly enough to allow the heroes to live by their own established groove makes it feel like it's a cozy fictional sequel in its own right. Badham may have shown an increased propensity for comedy, but more than that, he finally made a movie that is straightforwardly charming, no assembly required.