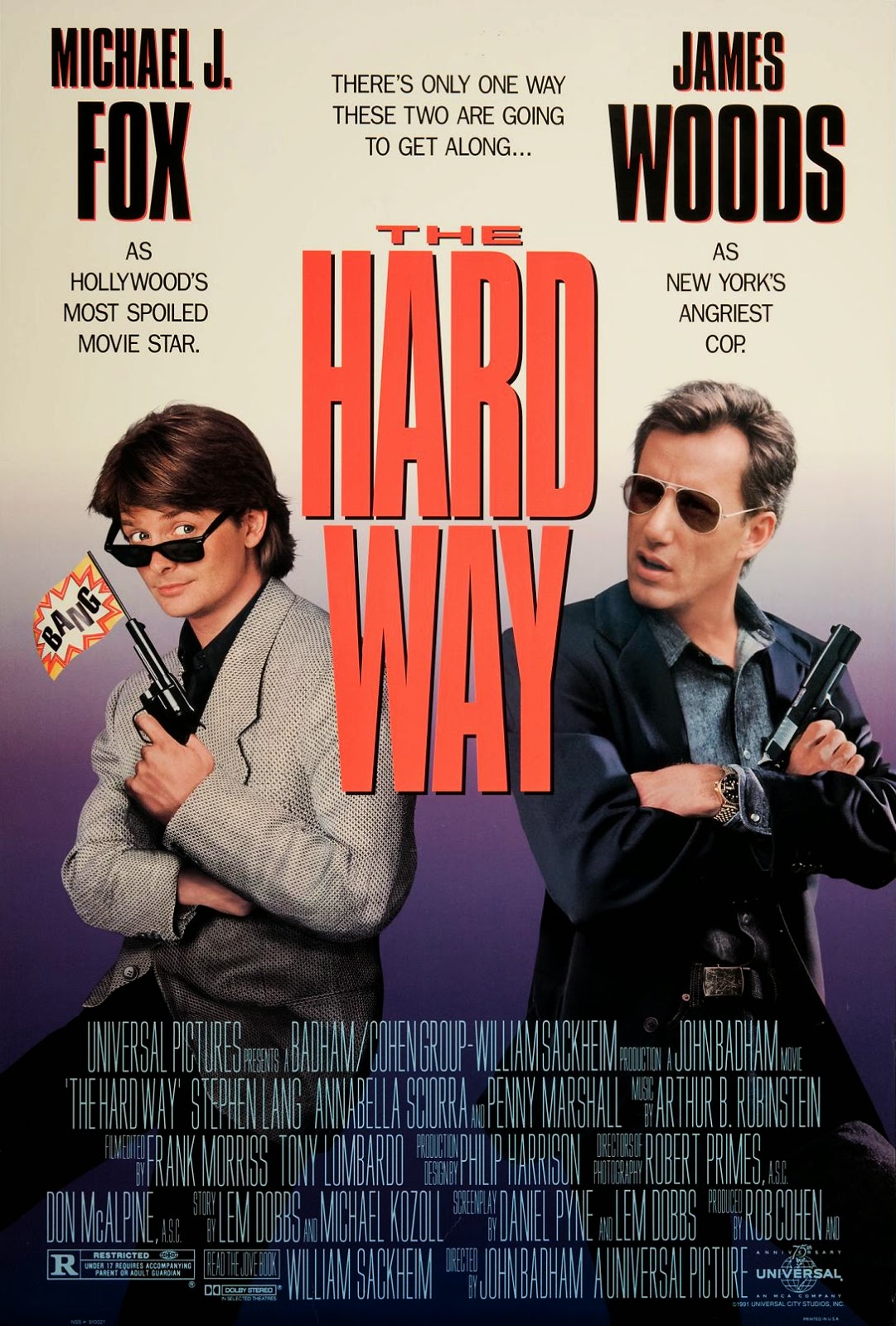 Last year from around the time of this review, NBC took Michael J. Fox and his titular sitcom nationwide, only to renege on their investment the very next month. And that was heavy. Although the show's lukewarm critical reception and disappointing ratings seemed to reflect its early death, there was something refreshing about seeing Fox's return to showbiz, especially comedy. And it wasn't just his Family Ties/Back to the Future heyday which prompted such sentimentalism, but going as far back to 1991 and the buddy cop goof The Hard Way.

This modest Hollywood attempt at culture crash meta-humor from Stakeout director John Badham got a lot of mileage from Fox's insider position as a superstar. In The Hard Way, Fox plays a pampered blockbuster actor named Nick Lang, his net worth $1.2 billion dollars on the back of cartoonish capers like "Smoking Gunn," whose sequel is on the verge of premiering and is being heavily advertised across the country. "I'm the only one who wants me to grow up!" Lang bemoans in the midst of a temper tantrum that just saw him chuck his People's Choice Award at the TV screen which aired the trailer for "Smoking Gunn II."

Of course, the truth was that Fox himself had experienced such a desire to stretch out his range in the wake of lightweight star vehicles like the Back to the Future trilogy and The Secret of My Success. Fox registered a lower-key turn in Paul Schrader's Light of Day and followed them up in the next couple of years with Bright Lights, Big City and Brian De Palma's Casualties of War. The public image of him as Alex P. Keaton/Marty McFly continued to dog him despite his solid character work, especially in that De Palma film where he had to share scenes with Method-y steamroller Sean Penn. Penn is compelling, to be sure, but you couldn't imagine him anchoring something as whimsical as Doc Hollywood or sending up his own ego as Fox does in The Hard Way.

He may not have any Elvis in him, as Mojo Nixon doth protest, but Michael J. Fox has his own star quality and a healthy sense of self-effacement. And to me, that matters a whole lot in terms of establishing a solid presence. 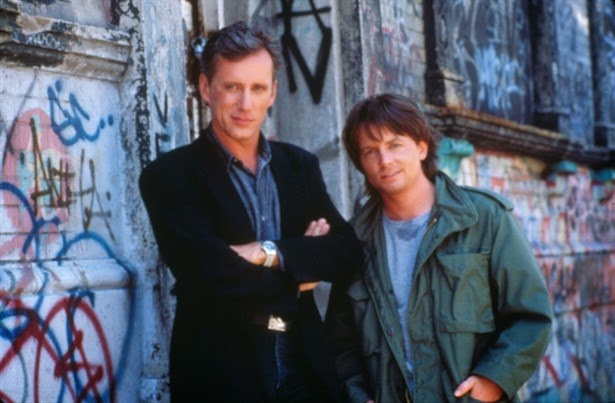 Getting back to the set-up, Lang has his eyes set on a coveted role as gritty policeman Nick Casanov in an unnamed project (only glimpsed subtly before the end credits), though his agent Angie (Penny Marshall, sardonically sweet) doesn't see him as viable a candidate as, say, Mel Gibson. Lang's solution: to ingratiate himself into the life of a real hard-boiled cop and attain the necessary knowledge and motivation to give him the advantage. Just who is his mentor?

That would be Detective John Moss, NYPD, a live wire of a loner played by James Woods, as committed as ever but not above flashing his own witty credentials like a badge of honor. The film opens on Moss as he is rushing to meet a hot date whilst navigating the congestion of Times Square traffic, going so far as to break out his siren to clear a path. Alas, if it's not one thing, it's another, as Moss receives a bulletin related to the case of the Party Crasher (Stephen Lang), a quasi-vigilante thrill killer who assassinates various types in plain sight. His latest mark is a drug dealer at a disco, and he makes sure to phone 911 in advance because, as Moss states, "he craves attention."

Moss and his partners fail to prevent the murder, and the Crasher makes a break among the panicking crowd. When his vehicle is chained to a tow truck, he commandeers it for his getaway, though not without Moss hanging madly on the driver's side door. The Crasher makes quick work shaking off the squad cars and finally Moss, slamming him into an oversized cigarette.

And Nick Lang's face is puffing on it.

So you can imagine Moss's dismay at having to give up chasing the Crasher to break in Lang as his partner. "Not if you tied my tongue to your tailpipe and drove me 80 mph naked through a field of broken glass." Lang, in his best Serpico costume, awaits and admires the verisimilitude of the station: "It's like a movie, it's so real!" This eager beaver shadows his reluctant coach as he resumes the investigation against the orders of Captain Brix (Delroy Lindo), interrogating a street crew called the Dead Romeos (among them teenaged Dante Smith, aka Black Star rapper Mos Def) in hopes they'll rat on the gun manufacturer who sold the Crasher his hi-tech piece. Lang attracts the attention of a rival Hispanic gang and barges in on Moss, thus instigating a shoot-out.

Along the way, Lang desperately tries to convince Moss to let his guard down so he can glean some pertinent wisdom from this "Yoda among cops." The instinctive, embittered Moss rebuts this "Dickless Tracy" prima donna with some hard-hearted gravity of the situation. This is not an acting exercise, after all, and lives are constantly in the balance. But Lang sticks around, whether at the frog dog stand, at Moss's apartment or even the pizzeria where Moss meets prospective girlfriend Susan (Annabella Sciorra, the predecessor of Marisa Tomei) and her daughter Bonnie (10-year-old Christina Ricci).

Woods and Fox prove equally zesty in their conflicting commitments, reaching their joint apex in a riotous moment where Moss has gone to a bar to get the disastrous date, which saw him roughing up a quartet of obnoxious bankers (among them irascible comedian Lewis Black), out of his mind. The student tries to teach the confused, crusty romantic on how to best express himself to a lady. Lang gets into the role of Susan, with his legs crossed and shirt unbuttoned, and thus tries to engage Moss into conversation. It's a play-acting gig which mirrors the male duo's own contentious pairing, but is handled with superhuman precision from both leads, and the scene emphasizes character details (particularly Moss's unfounded jealousy and divorcee frostiness) over cheap laughs. 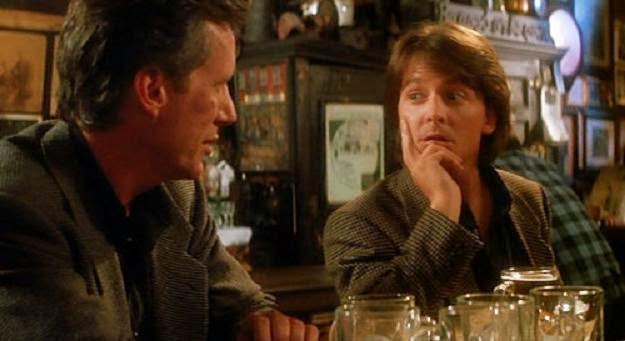 The script from Lem Dobbs (who co-wrote the story with Michael Kozoll) and Daniel Pyne is rich enough with bickering zingers and Hollywood satire. The opening mock-trailer for "Smoking Gunn II," a cross-pollination of Indiana Jones and James Bond adventures, is sharper than anything from Ben Stiller's Tropic Thunder. And two key action sequences are well woven into the fabric of this fish-out-of-Evian commentary, first a shoot-out in a crowded theatre showing "Smoking Gunn II" and a "top of the world" final showdown utilizing a mechanical billboard for Lang's film, heralded by his warning about the "third act" in a vindictive plot. A lot of quirky satire is mined from the act of smoking cigarettes throughout and it culminates in spectacular fashion in the end.

The chemistry between Jimmy and Mikey is just as unexpectedly deft as the Dreyfuss/Estevez coupling from Stakeout, perhaps even more so given the vast gulf between their warring knowledge of reality. But John Badham also wants to preserve the film's more violent edginess, so the Party Crasher is presented as a grinning fanatic who justifies the murder of innocent civilians in his sanctimonious super-villainy. A crucial divide between Moss and Lang stems from the instillation of post-traumatic stress, testing their limits through the danger of wrongly spilled blood. And Lang's manic desire to establish his movie star commitment is lent gravity by a couple of sobering circumstances.

Badham tempers such distressing elements with the kind of pop culture savvy which dominated his Short Circuit, leading to the ultimate realization that for all his commitment, Lang's claim to adulthood is just him doing a Bruce Willis parody. There is a heavy Hitchcock hand to that aforementioned rooftop squabble, which calls attention to life imitating art even more bluntly. And in poking fun at Lang's narcissistic insularity, there is a gag involving subway riders which sticks one to the post-Bernie Goetz, post-Death Wish craze for ordinary outlaw heroes.

The essence of The Hard Way is just the pure entertainment value afforded to and delivered in spades by "hambone" savants Michael J. Fox and James Woods. This is their Midnight Run, albeit a less intriguing variation in terms of criminal antics, and they juice the screenplay for all its quippy, incompatible liquid gold. Coming at the end of a genre that was about to be the domain of lone wolves instead of the bumbling duos, Badham sees this trend off with more energy and efficiency than he would demonstrate in his straight sequel Another Stakeout. The Hard Way is easy going, to be true, but at least it's persistently, procedurally hilarious.

The cast also includes Conrad Roberts (The Serpent and the Rainbow) as the wheezy-voiced gun runner Witherspoon and, among many in Moss's precinct, John Capodice, Luis Guzman and LL Cool J, whose "Mama Said Knock You Out" inconspicuously opens and closes the film. Me personally, I prefer James Woods dusting off the old Max Renn wardrobe for his big Dirty Harry moment in the subway. "See you in Pittsburgh, punk."